It All Started with a Tweet. The Beginning of the Asian Diaspora Coalition of Medical Librarians

Since the spring of 2020, we have been working together to create a caucus for MLA members who are a part of the Asian and Pacific Islander communities. Through discussion, reflection, and survey responses, we will be starting the Asian Diaspora Coalition of Medical Librarians. This is how we began and how we are doing so far!

Given that Asia has more than 40 countries on the continent, no one term can adequately include the immense variety of ethnicities, nationalities, and racial and cultural groups comprising “Asian”. We were hoping to capture an all-inclusive term for the Caucus, and through community input on a survey, we chose Asian Diaspora Coalition of Medical Librarians a name that recognizes the immense diversity of identities within Asia and the Asian diaspora around the world. We hope to have conversations with Caucus members on the topic of identity and naming, and plan to put together a list of resources to educate ourselves and Caucus members about the histories of various Asian diaspora groups.

Andrea Kang: I knew that when I first decided to pursue a career as an information professional, I was entering a field that was majority white. Despite this fact, I was extremely lucky that I connected with mentors who identified as Asian. These mentors truly impacted my career towards medical librarianship and gave me the ability to feel seen and represented. While racial and ethnic representation is not everything and should never be the sole goal in racial justice work, it is definitely meaningful. The feeling that Asian voices--all Asian voices, not just East Asian--were missing from the medical librarian community was what drove me to first tweet the following question: 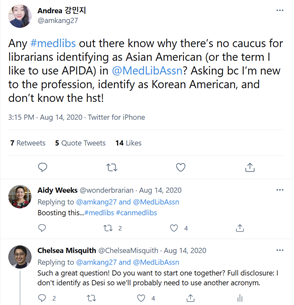 I was met with overwhelming support and connected with Chelsea Misquith and Seema Bhakta during the process! My hope for this new caucus is not only to provide space for people identifying within the Asian diaspora to build community with each other, but also ensure that our voices are heard in important decisions being made about us within the profession, as well as the healthcare and services that are provided to our communities.

Chelsea Misquith: I responded to the tweet because I love that Andrea asked an important question, which led to a great opportunity for us to collaborate and create an MLA Caucus to discuss issues relevant to Asian diaspora in medical librarianship. As an Indian-Canadian who has been working in the US for a little over 3 years now, I hope that this Caucus will be a space that centers the full diversity of Asian diaspora professionals in health sciences libraries, including those who identify as LGBTQIA+, disabled, immigrant, and other marginalized identities.

Seema Bhakta: When I joined MLA in 2017 as a student, I was curious about the lack of representation from my own racial and ethnic background. Although I had met mentors who identified as Asian, I never asked because I didn’t know how to voice that concern, where to look or whether I should even be asking. Now that I’ve been in the profession and have been with MLA for a few years, I feel more comfortable figuring out how to ask about representation in a profession that often feels homogenous. I want this caucus to be inclusive, a place for various identities and experiences within the Asian and Pacific Islander diaspora, and to be a community of support.

What We Learned from the Survey

In order for us to create a representative caucus, we thought it might be best to circulate a survey to get a sense of what the members might want the caucus to be named. The survey also offered a way to learn what the members would want to get out of the caucus. Over the course of about 3 weeks, we received 107 responses! Many of the responses indicated a need for mentorship, community building and support, and professional and leadership development.

Plans for the Future

Members voiced a concern of inclusivity and identity which we hope to address through future endeavors, as the caucus grows. The caucus will be a space for us to bring ideas and chairs to the decision-making table and offer outreach activities to other Asian diaspora communities. Our next step will be to hold a summer social to meet Asian diaspora MLA members. If you would like more information or want to get involved, please feel free to reach out to Seema Bhakta, Andrea Kang, and Chelsea Misquith.

We appreciate the support of the African American Medical Librarians Alliance, the Latinx Caucus, and the LGBTQIA+ Caucus; along with Gurpreet Kaur Rana, who has provided us with valuable assistance and insight in setting up the Caucus. We hope to collaborate with these and other MLA caucuses in the future.