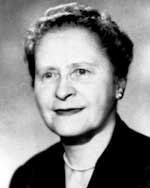 Bertha Hallam was the librarian at the University of Oregon Medical School from 1919 - 1965. She was president of the Medical Library Association in 1956-57 and contributed to the Handbook of Medical Library Practice. One of the first to refer to “health sciences” rather than to “medical” libraries, she says that the best part of medical librarianship was “the reference part, working with people.”

Bertha became a librarian by taking an apprentice course from the Library Association of Portland in 1912-1913 and later earning a Bachelor's Degree in Librarianship. In 1919 when she joined the University of Oregon, the library was very small, but it soon provided services to the entire Northwest. Bertha worked with county medical societies and physicians to promote literature searching, direct document delivery and package services, and started the Portland Area Special Librarians group. She received grants from the Rockefeller Foundation and from local physicians to build a new library and improve the collection.

In 1921 when Bertha joined the Medical Library Association “there were very few libraries that gave help to people to go to meetings.” She hosted the 1940 Medical Library Association meeting in Portland that was successful even though “it was so far from anything... it was doubted that there would be many there.” In those days, “the people who gave the program weren't paid, nor were the people who came to it paying.”

In 1934 while on the Medical Library Association Executive Committee she signed the certificate of incorporation along with Marcia Noyes and Charles Frankenberg. As chair of the committee for establishment of the headquarters office she says, “I remember the fight!...Colonel Jones or Rogers thought there wasn't enough money and got up and waved his hands and yelled for quite a while...but eventually we decided to try to start it.” After the office was established “it just seemed like an awakening and the organization grew.” As president of the Medical Library Association, “I had a stool to stand on because I was so short...” and people began to call her “Little Oregon“ He goal as president was “getting people acquainted and interested in each other as librarians.” In the 1950's she taught early refresher courses when there was little structure to continuing education: “you did as you pleased, tried to make up what you thought you'd like if you were [taking the course].”

Bertha's advice to librarians today is “go ahead and, if anybody offers you a job, take it...”