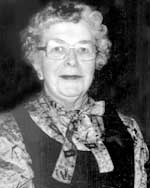 Helen T. Yast was librarian at the American Hospital Association from 1947 to 1975. A champion for the hospital librarians, she has been the “den Mother” and the “doyen of the hospital librarian.” Active in many associations, she received the Association of Hospital and Institutional Librarians Excellence in Service Award in 1976 and the Medical Library Association Marcia C. Noyes award in 1980. A tireless worker she comments that it is “hard to understand not putting the job...[or] MLA's best interest first in [one's] life” and admits that she is “happiest when I'm working.”

She began her career as an English and Latin teacher assigned to manage a small public high school library in the late 1930's. During World War II she joined the Public Health Service as a librarian and held several positions in Washington DC, Montana, New Orleans and Indiana. In 1947 she joined the American Hospital Association to work with the Cumulated Index to Hospital Literature. While working full time she also received a library degree from Rosary College. In 1954 she became director of the American Hospital Association Library, a post she held until her retirement in 1975.

Helen's mission for the hospital libraries was to “broaden [library] services to include all of the [professional] and paraprofessionals...in the 1940's only a doctor would dare step foot in the medical library” She was also concerned with the hospital library staff, often assigned from another department, who “didn't even know where to turn for help.” One of the her proudest achievements is her series of American Hospital Association Institutes on the basics of running a hospital library. She comments that “it is sad to see that [hospital libraries] are wrestling with the same things that they were in 1969 and in 1905 and probably before that.”

At the American Hospital Association she coordinated books reviews, indexed the Association's journals, including Hospitals, and developed an administrators collection library and a brief “ninety title journal list for the [small] hospital library” to complement the Brandon List. She published many articles on librarianship and hospital libraries, noting that articles on hospital libraries “ought to be published in the hospital literature...if you're going to reach the administrators. As a critical member of the editorial board for the 1972 Library Practice in Hospitals: a basic guide, she says “we had pretty high standards...[and] I think a book like that should have been published by MLA, not by Case Western Reserve.” The book remains her greatest source of pride in her career.

Helen was involved in standards for libraries and hospital libraries most of her career and served on the first Joint Commission for Accreditation of Hospitals standard committee. She comments that “I wish there could be standards that satisfy everybody, but I guess in this life we would never see [that]...[maybe] because there's too great a gulf between the standard setter and the profession.”

Helen's advice for future librarians is to “participate in any kind of cooperative effort like library associations...the more people you know the better you can do your job...be flexible...[and] be a delegator.”