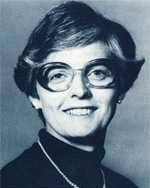 Her first professional position was as the Assistant Librarian in the Special Collection Department of the East Carolina University’s J.Y. Joyner Library. Jo Ann then took on the task of creating a health sciences library for the new East Carolina Medical School and served as Director of what was later named the William E. Laupus Health Sciences Library from 1969 until her retirement in 1997. She also held an appointment as full Professor and served on the Faculty Senate as Secretary of the Faculty Welfare Committee, Vice Chair of the Committee on Hearings and on the Universities Library Committee. She was on many School of Medicine, Division of Health Sciences, and University-wide committees, chairing the search committee for Director of the Joyner Library in 1982-83 and for the Dean of the School of Allied Health Sciences in 1990-92. She also served as Executive Secretary for the Search Committee for Chancellor of the University in 1985-1987.

Jo Ann was active in the Medical Library Association, and her first committee appointment was on the Continuing Education Committee in 1974-1977. She subsequently served on the Certification Examination Review Committee, Recertification Committee, Editorial Panel for Certification and Registration Examination, Ad Hoc Committee on Professional Development, Task force to Review the Academy of Health Information Professionals, and was Chair of the Credentialing Committee. In addition, she chaired the Medical School Libraries Group, the Professional Recognition Review Panel, and the Nominating Committee for the Medical Education Group. She developed and taught several MLA Continuing Education courses in library management marketing, and planning. In addition she was active in the Mid-Atlantic Chapter of MLA, the North Carolina Special Library Association, the North Carolina Library Association and the North Carolina Information Highway Library Team. She was a long-time member of the Association of Academic Health Sciences Library Directors and chaired its Committee on Education.

Jo Ann has published on a variety of subjects with many articles on continuing education. She is a member of Beta Phi Mu and Beta Gamma Sigma (business honor society), and has been listed in Outstanding Young Women of American, Who’s Who in American Women, and Who’s Who in Library and Information Sciences. In 1997 she was selected as Fellow of the Medical Library Association.