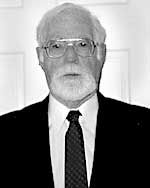 Charles W. Sargent is known for his interest in library education and his early expertise in computers, and has published numerous articles on information storage, retrieval, and transfer. He was the Director of the Texas Technology Health Sciences University Libraries from 1972 until his retirement. Charles served on the Board of Directors, as president of the Medical Library Association, and several terms as association parliamentarian. He notes that “librarians should be in the teaching mode.”

Charles received a Ph.D. in History from the University of New Mexico and a Masters in Library Science from the University of Michigan and entered the medical library field at the Lovelace [Foundation] Clinic in New Mexico as head cataloger and information specialist. He worked automating the library at the University of New Mexico where “the school was just then getting started ant the library was housed in an old 7-UP bottling plant.” After consulting at the University of Missouri for several years, Don Lindberg asked to him become part of the full time staff. Lindberg's “mode of operation was to use what he called self starters - he gave you an office, support staff and let you go on ideas of your own... my major responsibility...was to think up and develop projects such as the Union Catalog Research Project.”

While at the University of Missouri he became chairman of the new department of Information Science which had a complete curriculum in medical librarianship. Charles became committed to educating librarians but continued to practice librarianship because “unlike some other fields, librarianship needs to be practiced in order to keep abreast....” In 1972 he became head of the complex and multicentered Texas Technology Health Sciences Center Library, with libraries in four sites in west Texas. Commenting generally on academic librarianship, he says, “on an academic campus, everybody has two specialties, their own and how to run a library.”

Charles served on the Medical Library Board of Directors and says “I don't think many people realize... how much the people on the Board really give of their time and energies.” As Medical Library Association President he thinks his major contribution was helping the organization survive the loss of essentially the entire headquarters staff, a contribution that he says “will be lost in history.”

He enthusiastically encourages librarians to begin “pushing library walls out and for libraries to do things outside of traditional library roles.”