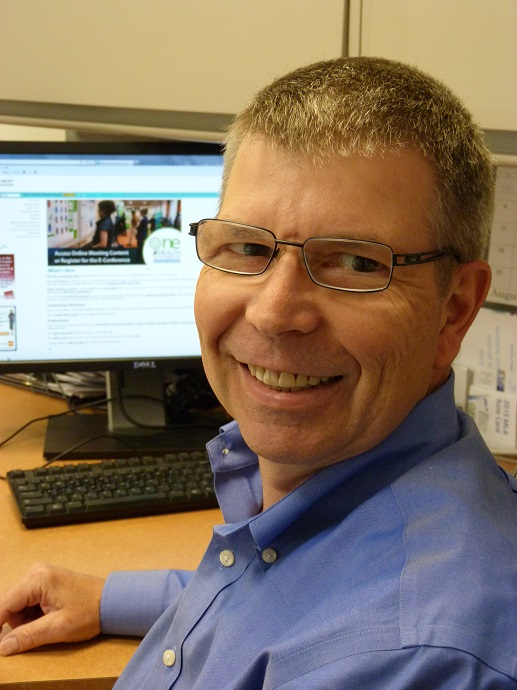 For thirty-six years, Ray Naegele was part of the Medical Library Association headquarters staff, primarily as director of financial and administrative services. He worked with three executive directors, other staff members, and numerous MLA members over the decades. He provided leadership in building a financial planning model for the association, implementing automation, overseeing the annual meeting, bringing outside vendors on board, and negotiating building leases.

When Naegele arrived in 1982 as business manager, he put professional accounting standards in place and began adopting technology. He was promoted in 1985 to the director position. He instituted a business plan for the association that reflected strategic planning and annual priorities and made more sophisticated budgeting possible. Cost centers were assigned to categories of financial objectives, depending on how much revenue they generated and their place in association activities.

We had the four categories of dues funded, subsidized, cost recovery, and entrepreneurial. Those were the four financial objectives, and the cost center could be assigned to any one of those four.

He streamlined dues billing and oversaw the centralization of accounting for MLA sections. He incorporated technology advances as they became available, bringing computers in-house and automating functions such as membership records and meeting registration and eventually every management activity. Naegele was responsible for headquarters office space and negotiated long-term leases for 919 N. Michigan Ave., 6 N. Michigan Ave., and 65 E. Wacker Pl. He served as interim executive director in 1991/92.

We always considered that MLA offered a terrific audience to the exhibitors, an audience that exhibitors can’t get anywhere else. MLA’s meeting was a bargain for them, because they could talk to a thousand decision makers in a short amount of time and it’s highly efficient for their sales folks…

And we gave exhibitors a lot of time. The welcome reception is in the exhibit hall, and we want exhibitors and members to have an opportunity to interact, because as the surveys show, for the attendees, members find the exhibit hall to be highly educational in staying current with new products and services.

and making use of professional meeting planners and outside providers. He incorporated technology for audiovisuals, speaker and attendee support, recording and distributing proceedings, and e-conference capability. He coordinated the redesign of programming and abstract submission.

From my perspective, it was a good meeting if it met the dual goal of getting good reviews on the evaluation—that meant that members enjoyed it and it was programmatically successful—and it met its financial objectives—we met our revenue targets, we kept our expenses where they should be. If you had one without the other, it wasn’t good. You needed to achieve both. So that was my measure.

He was the point person for contracts with hotels and conference centers.

He partnered with MLA members to help them achieve their goals, particularly presidents and the Board of Directors, treasurers, and National Program Committees. His hard work and approachable attitude were valued by all, and MLA conferred honorary membership status on him in 2019. The award citation noted that “[h]e made MLA resources work harder for members through his vision, ingenuity, expertise, and youthful energy.”

It’s not a culture you see at other organizations too much. And that’s a good thing to have, because I think it also binds the membership together… [T]he attitude and the work ethic and just the whole approach to issues and the open-mindedness all are still there…and what I think makes the association a cohesive unit of individuals. And there’s a lot of diversity also. Not everyone is in lockstep… But I think there is also a lot of cohesiveness among the ideals as well of what members bring and like to see, and a sense of fairness about everything… Those are things the association membership have and will keep the association relevant going forward. It’s their human qualities.