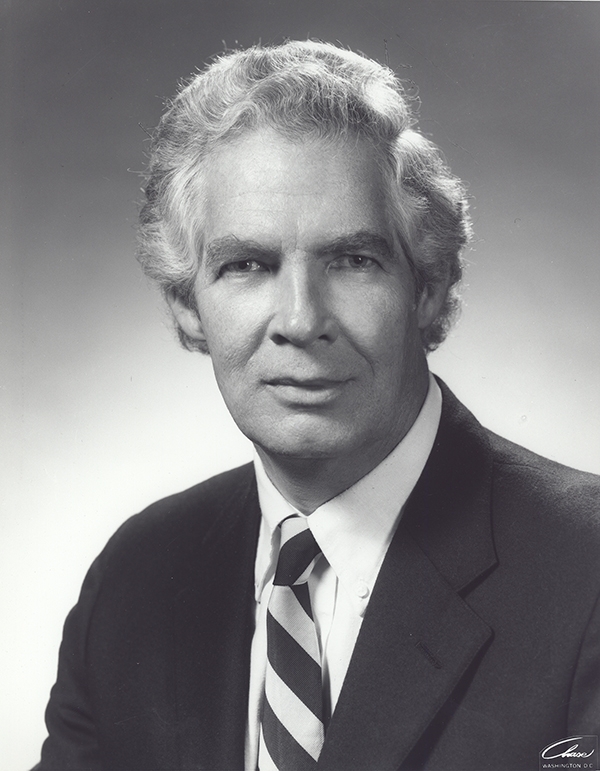 Donald A.B. Lindberg, MD, was interviewed shortly before his retirement as director of the National Library of Medicine, the world’s largest biomedical library, a position he held for over thirty years from 1984-2015. He led the library in pioneering the application of computer and communications technology to biomedical research, health care, and the delivery of health information.

Lindberg graduated from Amherst College and Columbia University College of Physicians and Surgeons, where he met his wife Mary Lindberg. “[I]t was a marriage made in heaven. That’s the whole story.”

… Amherst was falling in love with biology…  The best teacher of my life by far was Oscar Schotté. Lovely, lovely guy. I guess what I learned at Amherst was two things, both of which were surprises. One, I would say, is the thrill of discovery. It’s pretty fantastic. How many [times] in your life to go and do an experiment and discover something that nobody in the whole world knew? And then you can write it down and publish it and then everyone can know it. Well, that’s the process that I found very striking.

Trained in pathology as a resident at Columbia-Presbyterian Medical Center, he joined the pathology faculty at the University of Missouri-Columbia. There he became involved in the field that would come to be known as medical informatics, developing the first computer-based clinical laboratory.

[A]t Missouri I actually had the first computer-based clinical laboratory ever.  And people came from really all over the world to see it.  It became sufficiently burdensome that we just made a rule that Thursday is for visitors.

He was the first president of the American Medical Informatics Association.

As NLM director, he spearheaded transformative programs, including direct access to MEDLINE through Grateful Med

The hospital people felt threatened. They felt that the skill that they brought to the table and to their life and to their achievements was how to do searches. Someone needed an article on such and such piece, and the medical librarian would get it for him or her… But Grateful Med surely attempted to make it simpler… I guess it was a slight advantage to not be a medical librarian—because I’m also not an Ansel Adams-level photographer, but I’m a darn good amateur. And being a darn good amateur, you’re taught by the professionals, and you respect them, admire them. In the same way, doctors are not going to be anywhere close to as good searchers as medical librarians, but they’ll admire them.

and free Internet access via PubMed, MedlinePlus for the public, PubMed Central’s full-text archive, the Unified Medical Language System, the Visible Human Project, and ClinicalTrials.gov. He oversaw the establishment by Congress of the National Center for Biomedical Information, a focal point for access to molecular biology information and genetic sequence data.

… I guess the thing I’ve come to observe that I would not have known without doing this government job is the intimate interplay between policy and science. Some things you just can’t do without an explicit public policy, which you cannot get without a democratic process.

He was equally concerned with delivering high quality health information to everyone and recognized the importance of including patients and consumers as well as health professionals.

The doctors are okay, but they’re on their own. I don’t have to really worry too much about their understanding of the literature anymore or needing to get it good services that grow up to do that. But the patients are still the most important part. And the patients have changed radically from the time I started medicine. Now they’re both more formally better educated, but their attitudes have changed quite a bit. They’re ready to participate in decision making about how they and their family will be treated, what they want and need… [T]o me that’s where the action is… So while we’re continuing to support molecular biology, it’s almost a different direction—in some ways almost looking the opposite way, from patient education to patient information, but we’ve got to do both.

He emphasized outreach in expanding the scope of the National Network of Libraries of Medicine and established partnerships with minority serving institutions, Native American groups, and the public health community.

The vague idea of outreach is to help underserved persons or populations. But how do you translate that?... And again, I think the logical way is to talk to those populations and find out what they think they need to begin with, but at least you’re talking on the same wavelength.

The successful NLM Exhibition Program extended its reach through traveling exhibits to libraries throughout the country.

… I think the most striking thing about even the good shows and the good places is that every institution has stuff that they’re particularly proud of, and so whatever we send is amplified… by what they’re proud of. And that’s wonderful to watch. So it’s a different wonderment every place, but always quite interesting… I’m strongly in favor of these exhibitions. I think they’ve done a lot of good. Initially, the reasoning is, help the public understand about science…

Part of the thing we’re discovering in this Native Peoples exhibition is very well said by one old Apache healer… He’s saying, “You know what? All the people who come to see me,” he said, “my approach is, I listen to them. And if you listen carefully, they’ll tell you what’s wrong and they’ll tell you what you’ve got to do to help them. So I don’t have to be an expert in everything or even anything, but I’ve got to listen to them.” Well, that lecture should be repeated about three times a day for every medical student in the bloody country, because it’s so easy to get fascinated by what you’re going to do and what you know how to do and the lab measurements and all that.  But the patient still will tell you if you let them—most cases.

Lindberg led federal interagency programs in concurrent positions as founding director of the National Coordination Office for High Performance Computing and Communications in the President’s Office of Science and Technology Policy and as U.S. coordinator for the G-7 Global Healthcare Applications Project.

Through his leadership, the programs and services of the National Library of Medicine have helped librarians provide access to health information and continue to reinvent themselves and develop new roles. The Medical Library Association recognized his contributions to the partnership of MLA and NLM by awarding him honorary membership in 2013. The MLA Donald A.B. Lindberg Research Fellowship funds research linking information services provided by librarians to improved health care and advances in biomedical research.

I’ve been amazed at the ability and flexibility of medical librarians… You’re almost tempted to say they can do anything. But I certainly think that most can imagine doing anything, and most can imagine taking a swing at any ball they receive. So I think that is the right attitude. Nobody in the world can tell you what is the world going to be just like thirty, forty years from now. Sure it’ll be different, but it’ll still be very, very information intense.