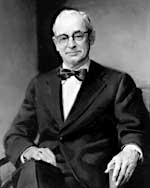 Robert Lentz was affiliated with the Thomas Jefferson Medical School for fifty-five years as library assistant, library director, and archivist. As an educator, he influenced the interviewer and countless other medical librarians by teaching an approved course on medical bibliography at Drexel University for fifteen years. An active committee member for the Medical Library Association, he was selected as President and served from 1960-61. On the regional level, he was a founding member of the Philadelphia Chapter in 1951.

Although more than content with his childhood upbringing on a farm in Southern New Jersey, Bob had no interest in following in his father's footsteps as a dirt farmer. He took a secretarial course of study at Banks Business College in Philadelphia after graduating from high school. He secured a job with some difficulty in the early 30s and so began his long career at Thomas Jefferson Medical School. Lacking a background in medicine, he found ways to compensate. "I remember that shortly after starting work in the library I had a phone call one day when the boss was out on his lunch hour. The call was... the exact title of a book by Chevalier Jackson...and I'll never forget the title of it, the title was Bronchotomy, Esophagoscopy and Gastroscopy. So quickly I asked a medical student standing nearby how you pronounce those words and I went back fast and repeated it before I had forgotten." Bob prepared for new responsibilities by continuing his education on a part-time basis. It would take years to finish his undergraduate and graduate studies which was interrupted by three years of service with the army during the war as a conscientious objector. For the two-week practical experience for his master's degree, he was unusual in that he went far afield. "I selected Tulane University because of the librarian. I've always felt that you can judge the value of a medical library by the type of person who is chief administrator. So I selected Tulane because Mary Louise Marshall was the librarian there, and I thought that it would be an interesting learning experience to work with someone of that caliber."

Bob served the Medical Library Association on the Committee on International Cooperation and the Exchange Committee and as Placement Advisor. When asked to identify topics that generated heated discussions, he recalled certification and the central office. "The president serving the year before me was Mildred Naylor, the librarian at Emory, a strong-minded woman. A delightful person, a dynamic person, and a very qualified person, but strong-minded and she was definite that there had to be a central office. The president following me was a strong-minded woman, very qualified. I respect her very highly. She had very serious doubts that we could afford a central office. And there I was between them." An issue that later evoked debate was the Vietnam War. "Yes, that was when a committee on relativity came out of that. Which was good, I think, to face a social issue whereas we had been thinking of the Association strictly from a professional standpoint, rather than to face a social issue. Because in life you can't separate everything. Things do affect each other."

One of Bob's lasting achievements is the library at Thomas Jefferson Medical School, which was completed in 1970. Planning it was a task he first dreaded and then came to find fascinating. He considered himself fortunate to have the support of Al Brandon as a consultant, an architectural firm experienced with work on the Harvard library, and a sympathetic administration. He claimed the Handbook of Medical Library Practice bailed him out when he had to prepare a presentation about the building to a committee of the Board of Trustees. Besides the new building, Bob prided himself on the book collection at Jefferson. "By that time the College of Physicians had begun to limit the number of books they were buying, and we felt that we needed to see that the books in the field of medicine were available in the Philadelphia area, so we limited our selection of periodicals for some time, and used the funds that were saved there to purchase books. The matter of our book collection was studied rather carefully...I think that Jefferson has maintained its eminence in the field regarding the book collection in medicine."