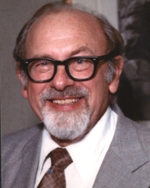 Joseph Leiter earned his B.S. degree in Chemistry from Brooklyn College in 1934, and at the age of nineteen, he passed the U.S. Government exam in science with a perfect score. Joe Leiter's career in Federal service was launched. It spanned fifty years. He first worked as a laboratory apprentice at the Bureau of Standards, "...stretching things made out of rubber to see when they break." In 1937, Joe was offered a job at the National Institutes of Health, National Cancer Institute (NCI), and became a junior chemist at NCI's Boston location. When the Boston group moved to Washington, D.C. in 1939, Joe and his wife, Sarah, went with them. He received his Ph.D. in Biochemistry from Georgetown University in 1949. Joe headed NCI's Biochemistry Section, Laboratory of Chemical Pharmacology, and in 1955, became Assistant Chief of Cancer Chemotherapy. He developed one of the first large electronic data processing systems for processing more than 250,000 animal screening tests a year, and for analyzing, reporting, and publishing the results.

Joe retired from NCI in 1965, and immediately went to work at the National Library of Medicine (NLM) at the request of then Director, Marty Cummings. When he took on the appointment as Associate Director of Library Operations at NLM, Joe acknowledged he had no training in librarianship, but reflected, "I really stayed away from all the mechanics of the library because I knew so little about them that I figured the best thing to do was to let things run until there was trouble, and then you'd have to try and solve them." At Joe's retirement, Marty said, "Joe brought with him a clear and critical analysis of how librarians should better serve user needs."

Along with overseeing and managing the daily functions of the NLM, Joe was associated with numerous changes in NLM services and procedures. He was involved in the expansion of services by the Regional Medical Library Network, and the provision of services to hospital and other medical libraries through the network. His decision to shorten the MEDLARS training period to one-week, and to provide training to people from outside the regional medical libraries, made the MEDLARS system accessible to more users.

Some of Joe's original ideas for changes at NLM did not take hold right away. In the 1970's, he presented a system for adding the citation number in the Cumulated Index Medicus to the MEDLARS record, but "nobody seemed to be interested in the shortcut." Eventually, when DOCLINE was implemented in the 1980's, the citation number was heavily used.

Within the medical library community, Joe's reputation grew as a strong supporter of the advancement of women and minorities. He rejeuvenated the NLM Associate Program, insisting that applicants plan useful activities and research, rather than working in routine library operations.

"I can't point to any single thing that was really a very great accomplishment during my period," Joe remarked. "Well, I think the growth of the librarian community as a, not an operational group, but as a thinking group is probably the most gratifying..."

Among his many awards, Joseph Leiter received the Assistant Secretary for Health's Award for Exceptional Achievement, for outstanding and consistent achievements and innovations in the creation and distribution of information services to the biomedical community.