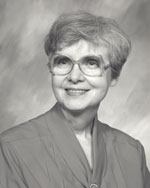 Virginia H. Holtz, born in Milwaukee, Wisconsin, on July 6, 1932, grew up loving books and animals. As a student, she worked in public and university libraries, and as a child was an active part of the Milwaukee County Zoo youth programs. She earned her Bachelor of Arts in Liberal Arts from the Wisconsin State College at Milwaukee in 1954. Virginia attended the University of Wisconsin Library School in Madison, Wisconsin, graduating in 1956.

Virginia spent her entire library professional career at the University of Wisconsin Health Sciences Library. She began her career at the library in Medical Library Service, the library outreach service which provided medical information to the physicians throughout the state of Wisconsin. Virginia became associate librarian in 1967 and director in 1971. In 1993, the Wisconsin Health Science Library Association voted her Librarian of the Year.

Hallmarks of Virginia’s leadership included outreach to strengthen hospital libraries in the state and a focus on users. She believed in the application of business and organizational management principles to library administration and studied the collection and automation of data. One idea she followed was

…keeping what we were all about in mind to be described in no more than two sentences… It became obvious that if you didn’t know what you were about then you were not going to be very successful at what you did. Though it does seem fairly simplistic, we… put up a banner right outside my office on… one of the busiest hallways in the building, [saying] that we were responsible for providing information services to anyone in the state who needed them no matter what form they came in…

She also believed in the importance of staff and developed an organizational model in which staff took turns in section and division administrative responsibility. Leadership authority was “earned not given” in the system of elected terms for coordinator positions.

Through extensive involvement in regional and national committees, Virginia had a far-reaching impact on the profession. Her Medical Library Association service included the Board of Directors, the MLA/National Library of Medicine Liaison Committee, Publications Panel, Nominating Committee, and National Program Committee. She was the Janet Doe lecturer in 1986. A fellow of the Medical Library Association, she also reached the distinguished level in the Academy of Health Information Professionals. She served as president of the Association of Academic Health Sciences Library Directors and on NLM IAIMS grant review teams. Virginia chaired the Greater Midwest Regional Medical Library Network and served on many local and regional committees.

Virginia retired from the library on June 30, 1997, after 41 years of service. Retirement enabled her to spend more time with her family, her friends, and her dogs, cats and horses. Virginia showed and bred AKC champion collies. She was owner/breeder of one of the top-producing champion rough collies of all time and was instrumental in establishing the Smooth Collie in the United States. She received her AKC judging license in 1972 and, among her numerous judging assignments, judged the Collie Club of America specialty three times. She enjoyed gardening, collecting and trying out new recipes, and reading. Virginia died at her home on April 3, 2006, at the age of 73.