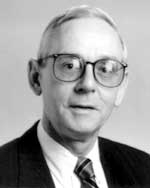 The interview with Mark Hodges was conducted in 1998, three years after his retirement as Director of the Eskind Biomedical Library at Vanderbilt University.

Mark initially planned to become a high school history teacher but became interested in librarianship during his service in the British Army. As a member of the Royal Army Educational Corps, he was stationed at the Army Education Center in Suez, where he was put in charge of the library.

When he returned to civilian life, Mark took a job as a library assistant at Sheffield Public Library. After a leave of absence to attend Library School at Leeds College of Commerce (now Leeds Metropolitan University), he sat for and passed the registration exam of the British Library Association, and was certified as a "chartered librarian" in 1956.

The following year the head of the Library School notified him that Hamilton College in upstate New York was seeking a British librarian for a one year term, with possible renewal for two subsequent years. Mark applied for the position and was hired.

Although he was not intending to stay in the United States, Mark decided to seek a permanent visa, rather than a temporary work permit. This proved to be a fortunate move. Following three years at Hamilton College he decided to stay in the US, moving first to Swarthmore College for a year, then to Brooklyn Public Library. It was at BPL that he met and married his wife, Judith Rosenbloom, also a librarian.

In 1964 Mark applied for the position of circulation librarian at Harvard Medical Library despite his feeling that he would "never get a job there" because, as he states "my "academic qualifications were meager "and "my medical qualifications were nonexistent." Nevertheless, Mark was hired by Ralph Esterhause, then director of the library. At that time Countway Library was still under construction, and Mark was given the job of organizing the move of the collection to the new library, to move the collection of the Boston Medical Library to Countway and to oversee the merger of the two collections. In 1966 Countway received a grant from NLM to serve as the Regional Medical Library for the Northeast Region, the first RML in the country. The program was known as the New England Regional Medical Library Service (NERMLS) and Mark was appointed program director. At the 1968 MLA meeting, Mark presented a paper describing this experience, the first of his many MLA presentations. Mark talks fondly of his time at Harvard, and has maintained contact with many of his colleagues from that time.

After six years at Harvard, Mark moved south to Emory University where he undertook to set up the RML for the South East Region, a decentralized model very different from his experience in the Northeast. This was the first time Mark had been in the south, and he and his family enjoyed both southern hospitality and the southern climate. After several years, Mark felt he had done as much as he could in this position, so he applied for the position of library director at Vanderbilt University Medical Center. During his tenure there, he doubled the size of the staff, created a Special Collections Department, and oversaw the construction and opening of the Eskind Biomedical Library in 1994.

In addition to his career, the interview describes Mark's professional activities - his amazement at the size and scope of ALA meetings; his association with MLA, and his involvement with the Southern Chapter of MLA. Following his retirement, Mark was appointed Historian of the Southern Chapter and at the time of the interview he was in the process of writing a history of the chapter - an interesting turn for someone who originally planned be a history teacher.