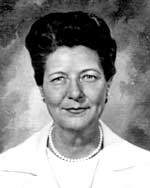 Bernice Hetzner wended her way through public, academic, and school libraries in Colorado, Nebraska, California, and New York for thirteen years before settling on medical librarianship at the University of Nebraska in her native Omaha. She was involved with a number of professional associations, but she devoted a major portion of her service activities to the Medical Library Association as committee and board member, president, and International Federation of Library Associations delegate. Her articles appeared in the Bulletin of the Medical Library Association and the Journal of Medical Education. She contributed to the 1970 edition of the Handbook of Medical Library Practice and to the Dictionary of American Medical Biography. Bernice was recognized with the 1958 Murray Gottlieb Prize for her essay, "The Development of the Omaha Medical College from 1881-1901." In 1974, the University of Nebraska College of Medicine recognized her dedication with its Distinguished Service to Medicine Award. It was the first time the award was given to a woman and the second to a non-physician.

Bernice was an early recruit to librarianship. "When I was in high school, I received a notice to report to the librarian. I was very nervous about this. I didn't know of any overdue books I had. When I got to her office, she said that I had been recommended to work in the high school library. This was not just a job as far as I was concerned; it was quite an honor." In preparation for what she expected to be her own career as a high school librarian, she studied at Creighton University, the University of Denver School of Librarianship, and Colorado State College. In 1947, Bernice accepted a position as a cataloger for the library at the University of Nebraska College of Medicine Library with a certain amount of trepidation since she had no medical training. Within a year, she found herself in administration due to the sudden death of the director. When recruitment efforts for a permanent director ran into difficulties, she accepted the position for two years. She stayed for twenty-five.

In speaking of the changes which occurred in the library over those years, she focused on the building and the reporting structure. The library was given temporary quarters in patient wards in 1927 and would wait until the Medical Library Assistance Act for a suitable space. Similarly, years would pass before the undesirable reporting structure to the Director of the University Library in Lincoln, some 65 miles away, was changed to the close at hand Dean of the College of Medicine. Another constant during her administration was the struggle to attract recruits to Nebraska. One improvement she remarked on was in the area of medical bibliography. "When I entered medical librarianship, some of my librarian friends kind of sent me consolation because they said medical bibliography was in such a mess...The information that one needed was mostly in journals and the publication of journals was lagged...It wasn't until in the sixties...that they really got a handle on medical bibliography. With the advent of MEDLINE, things kind of fell into place. In fact, the medical field then took great strides ahead of all the other subject areas in the control of their bibliography."

Towards the end of her career, Bernice was encouraged to take on the task of organizing a regional medical library program for Missouri, South Dakota, Nebraska, Colorado, Kansas, Wyoming, and Utah. Unlike other regions that established one central library, this one capitalized on the expertise and strengths of libraries in a territory that covered nearly 20% of the country. This decentralized model included features which are considered commonplace today - resource libraries, the advisory committee, and provisions for net lenders. Bernice later served on the Board of Regents of the National Library of Medicine and as a consultant to it when her term expired.

Much of Bernice's committee work with the Medical Library Association centered on standards and certification. She certified applicants under the grandmother clause and approved courses at library schools. In discussing certification by examination, she believed it was a sounder method to assess competency - if constructed by qualified examiners - than accumulation of credit hours. Bernice also served on the joint AAMC/MLA Committee on Guidelines. The objective of the committee, led by Paul Sanazaro, was to set broad standards to guide the development of libraries at the increasing number of medical schools. The other committee members were Estelle Brodman, Ralph Esterquest and Tom Fleming. Its report, based on visits to twenty-two medical schools, was published in 1965. She was deeply involved in the establishment of the Central Office from writing the job description for the Executive Secretary, recruiting Helen Brown Schmidt, and finding the office space in Chicago. She recalled some of the issues during her presidency: financial worries, strategic planning, the impact of the introduction of Regional Medical Library Program, and the Williams and Wilkins copyright lawsuit against the National Library of Medicine.