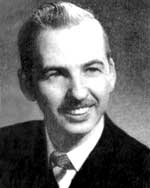 Colin William Fraser was Director of the British Columbia Medical Library Service from 1961 to 1991 and was major force in medical and hospital librarianship in the Pacific Northwest and in the Canadian medical and library communities. One of his basic beliefs was that we must "raise the profile of librarians in the medical community--it [is] really important to establish who librarians [are] and how useful they [can] be."

An early player in outreach services to rural physicians, he started library services in 32 provincial hospitals, and consulted on hospital and hospital library projects throughout British Columbia. Fraser commented that it is important to "go right out to the hospitals and talk to the doctors about their library and talk to the administrators about financing." Teaching about librarianship was also critical for him and he taught courses in librarianship both in the field and at the University of British Columbia School of Librarianship. He comments that he would most like to be remembered as a teacher.

Fraser believed strongly in the importance of associations and was active in many organizations. He served on numerous MLA committees and was National Program Chair, chair of the Membership and Scholarship Committees, chair of the Medical Society Libraries Section, and first chair of the Canadian Regional Group. Later he was on the first Board of Directors and was Program Chair of the Canadian Health Library Association, which he describes as "a very thriving organization." He attended nearly all MLA and CHLA annual meetings and "always came back with new ideas." Also a strong supporter of the Pacific Northwest Chapter, he acted as chair three times, and says "one of my concerns about [PNC] was that there be a Canadian presence [and I think I] raised the level of Canadian participation quite a bit over the years." He also was a founding member of the Health Libraries Association of British Columbia, Director of the British Columbia Library Association, and long-time chair of the Archives and Continuing Education Committees of the British Columbia Medical Association.

He says, "it was always important to me to be in a service occupation," and advises new librarians to "be open to new ideas [and] to new roles... [and] don't forget the human aspect of librarianship."