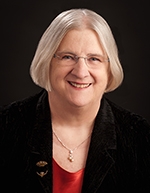 Rosalind (Roz) Farnam Dudden, AHIP, FMLA, directed two libraries in Denver, at Mercy Medical Center, a Catholic general hospital, and then National Jewish Health, a specialized immunology and respiratory medicine treatment and research center, for forty years. “In the beginning, people would say, ‘I’ve never had a librarian who made house calls.’”

She is recognized for leading collaborative efforts with hospital librarians in Colorado and the Medical Library Association, for adopting and promoting the use of technology, for her scholarship on evaluation, and for communicating lessons learned to colleagues.

Dudden facilitated cooperation in the large group of hospital libraries in Denver through the Colorado Council of Medical Librarians (CCML) and the Denver Area Health Sciences Library Consortium (DAHSLC).

Just being able to bounce things off of people, getting perspective on things, and getting encouragement to go ahead with stuff, because sometimes you think, well, maybe I shouldn’t be doing all this.  But people would say, “Go ahead.  Do what you want.”

She helped establish the consortium, which organized MEDLINE training to allow members to get searching codes for their institutions. In resource sharing, she led compilation of the CCML union list of serials, the use of an early email list, and surveys on interlibrary borrowing patterns that culminated in a study demonstrating that primary access libraries borrow proportionally the same amount as larger libraries, disproving a popular view. Dudden promoted the use of integrated library systems and was the principal investigator on a National Library of Medicine grant to enhance and extend the Shared Automated Library System (SALS) at the University of Colorado Health Sciences Center to Denver hospital libraries.

Dudden chaired the committee that published the 1984 edition of the Medical Library Association hospital library standards.

You had this huge debate on whether to write a quantitative standard or a qualitative standard.  JCAH was very qualitative, because there were no known quantities of what a [hospital] library was.  There still were not when we started ours, so we had a combination.

She worked with the Consumer and Patient Health Information Section (CAPHIS) to develop their first website and database of consumer health libraries. She served on the MLA Board of Directors in 1998/2001.

One of the things about MLA that I just loved was that you would learn so much from the speeches and all the things you could do in your own library. I marked off, could I do this in my library? I wrote down these things. Could this happen in my library? And maybe this is great. Maybe the group could do this. I was so excited. I spent an hour writing down all the things I’d learned at that convention.

Dudden was instrumental in the MLA Benchmarking Network, which collected and presented comparative data from hospital libraries on size and activity in a multiyear effort.

We had two articles next to each other in the JMLA… I was determined that people would know how we did it, and I then was determined that enough results would be published so people could look back to 2006 and see what hospital libraries were like. Because, to me, even though all the results were on the web, the web is ephemeral. Maybe it would go away and maybe you’d never see them again.

Dudden’s achievements in her home institutions demonstrated the same dedication to collaboration and innovation in technology. She developed an audiovisual sharing program for the Sisters of Mercy regional group of hospitals. She created the first hospital website in Denver at National Jewish Health and was coprincipal investigator for an NLM/National Science Foundation Internet connection grant for the hospital. She established the role of librarians in systematic reviews at National Jewish.

[Y]ou need to be out there where the people are who are using your library and understand what their lives are like…  But which other department has to know every department? Not many… whereas the library has to interact with every department. You, as a librarian, know more about the departments of the hospital than most of the people in the hospital…

Among over thirty publications, she authored Using Benchmarking, Needs Assessment, Quality Improvement, and Library Standards in 2007, with support from a publications grant from NLM. She coedited the second edition of the Medical Library Association Guide to Managing Health Care Libraries, published in 2011.

Her work has been recognized many times by MLA, with the Ida and George Eliot Prize in 1981 and 2012, Frank Bradway Rogers Information Advancement Award in 1995, President’s Award (for her work on benchmarking) and Fellowship in 2003, and MLA’s highest honor, the Marcia C. Noyes Award, in 2013. National Jewish gave her their first Friend of the Faculty Award in 2002.

They said in their little speech that I dragged them kicking and screaming into the Internet age [laughter]. And I did. I had some pushback; it wasn’t all straightforward. A lot of people didn’t like e-journals… I love e-journals and I think they’re great, but they’re not going to be the end. Things are going to change, and librarians need to get ready for it.