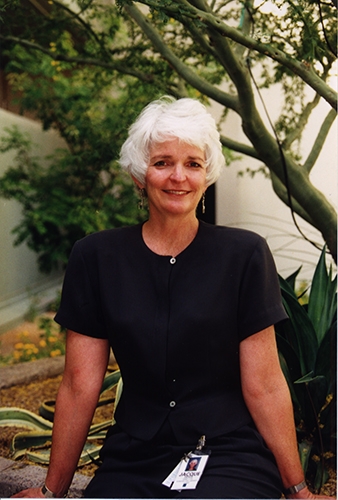 Jacqueline Donaldson Doyle, FMLA, is known for her leadership at Banner Health (formerly Samaritan Health System) in Phoenix, as well as for her work with academic libraries at new medical schools. Her career is noted for her advocacy of the importance of libraries in hospitals and other environments, the transferability of librarian skills to nonlibrary settings, and the value of collaboration.

[Y]ou just know you can’t do it by yourself, and you know you have that whole group of people around you and behind you to push you forward… We do things together.

The longest period of Doyle’s work history was spent in multiple positions at Banner/Samaritan hospitals, but the defining characteristic of her career may be its nimbleness and her ability to assume new roles and to build new organizations. Her first experience was in public and university libraries around the time she was earning her master’s degree at the new library school at California State University, Fullerton. Her introduction to medical librarianship came in 1973 at the one-person Arizona State Hospital library, where she was mentored by librarians from the Pacific Southwest Regional Medical Library Service (PSRMLS).

I think I just luckily fell into it, honestly, and I loved it at the beginning… And for some reason, I felt like I was part of the medical team. That made it special. And they respected me and my expertise… I liked the intellectual part of it very much, and learning. I had to wander through the little stacks of the little library, and I didn’t know what any of these were, so I had to go, “What is this subject matter?”

A period of family responsibilities combined with part-time positions at public health and other organizations was followed by a job at the University of California, San Diego, Biomedical Library. She incorporated this varied experience as her career took its primary shape as the library director at Good Samaritan Medical Center, where she spent twenty-two years in the Samaritan and Banner organization taking on new library functions and responsibility for a consolidated regional library system, adapting to corporate changes, establishing a library at a new hospital, and assuming management positions in planning and service excellence.

But it’s very similar to libraries. You have to know what people want, whether they know it or not, and anticipate what they’re doing, and hopefully figure out a way to meet their needs, which is what librarians have always done. So it wasn’t that dissimilar.

Along the way, she applied her perspective and knowledge as a librarian. A major staff layoff led to even more versatility and a return to academic librarianship, in the significant role as head librarian for the new University of Arizona College of Medicine campus in Phoenix for seven years before her retirement in 2013.

Doyle’s professional contributions reflect her experience and values. She demonstrated her commitment to collaboration as the first chairperson of what became Central Arizona Biomedical Libraries (CABL) and was instrumental in merging Arizona librarians into the Medical Library Group of Southern California and Arizona (MLGSCA) in 1975, later serving as president of this Medical Library Association chapter. “So once we got connected, then we had power and strength and information.” She chaired MLA’s Hospital Libraries Section and was influential in the development of hospital library standards, as a representative to the Joint Commission Information Management Task Force and contributor to the MLA standards,

It was important for me to use the standards as a way to justify the existence of the libraries, although there was some debate, I know, going back and forth… But I cared about them enough to use them as a tool.

and she was a frequent author, presenter, and instructor on aspects of hospital librarianship. She played a key role in the establishment of the Arizona Health Information Network (AZHIN). Doyle also made a major contribution to academic libraries by creating a group in the Association of Academic Health Sciences Libraries (AAHSL) for librarians at new medical schools.

Doyle twice served on the MLA Board of Directors, including as president in 1998/99.

I love seeing new places and meeting all the different people in the different chapters and finding out what their issues were, and just learning and enjoying those people. They were so fun and different, and everybody was a little different, but we had the common bond of being librarians in a health sciences community.

She presented the Janet Doe Lecture in 2002 on her perspective from the corporate side of the hospital.

The department I went to work for was called care management, which was setting standards for care in all the hospital departments, regardless of what the department was. And so I learned what was common to all the different departments, and what wasn’t, and tried to figure out how the library connected into that, and how it was really relevant, and we could really help them a lot if they’d only let us, if they’d only recognize that we have something to contribute. So I liked that. I just thought that being in a different place, but being a librarian, gave me strength that nobody else had, because they’d never been a librarian. We could offer something that nobody else could offer, so that was important to me.

She was honored with the MLA Award for Excellence and Achievement in Hospital Librarianship (now the Lois Ann Colaianni Award) in 1995 and the 2012 Marcia C. Noyes Award.