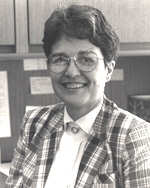 Carol A. Burns served as director of the Robert W. Woodruff Health Sciences Center Library (formerly A. W. Calhoun Medical Library) at Emory University from 1984 to her retirement in 2000 and spent her career as a medical librarian there. She participated in the seminal period of audiovisuals librarianship in the 1970s as audiovisual librarian and a Regional Medical Library Program media consultant.

[W]hen the National Library of Medicine recognized that media…were likely to become important in libraries, they were right… [T]he value [was] not only to the profession, but to those of us who were selected, because most of us were young, and we really were put in a position of having contact with directors, having contact with deans, with hospital administrators very early on in our careers… [I]t gave us more of a total picture of what the world was that we were really trying to work in, rather than just our niche within the library.

Carol also held positions of associate librarian for services to the public and acting director at Emory. Upon the death of Miriam Libbey, she was appointed to the director position.

Carol earned her master of arts in library science at the University of Michigan, where she studied medical librarianship, held an assistantship in the Medical Center Library, and helped build a library collection at a correctional institution as part of a bibliotherapy program. She took courses from Gwendolyn Cruzat; “…there are a number of us around the country who owe our beginning success to Gwen... [S]he really held you accountable for thinking about what you were doing…”

[T]hat’s the beauty of the Southern Chapter. You can start out and it’s a very supportive environment… you can learn how to give presentations. You can learn how to become a leader in the association… they give you those opportunities… Everyone knew that sooner or later it would be their job to chair this committee, to be this officer… to play a certain role and we all accepted that responsibility.

Carol participated in the Atlanta-Tbilisi Health Partnership between institutions in Atlanta, Georgia, and Tbilisi, Georgia, to help the country provide better health care for its citizens, including through library services for medical education. “[They saw how] we value the relationship between access to information and good quality information resources, as part of the educational process.” As a contributor to the partnership, Carol traveled to Tbilisi to help establish the National Information Learning Centre, primarily an electronic library service. “…Georgia is a country where traditionally women did not play roles of this type of responsibility in any kind of business setting.”

because I thought I needed to learn more about library research and because I really admired Jocelyn Rankin and the way she used research in her own library practice… I loved every minute of it… even when Jocelyn and Cheryl and I were crunching those numbers at the tail end and trying to analyze the results...

Carol was elected a fellow of the Medical Library Association in 2001.