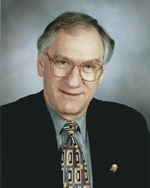 Robert M. Braude received his Masters of Library Science in 1964 from UCLA. After working at the UCLA Biomedical Library for the Health Sciences from 1964 to 1968, he became Associate Director at Denison Memorial Library, University of Colorado Health Sciences Center from 1968-1975, and then Director from 1975-1977. From 1978-1986 he was Director of the University of Nebraska, Leon S. McGoogan Library of Medicine and Director of the Mid-continental Regional Medical Library Program. In 1987 he received a Ph.D. in Higher Education Administration from the University of Nebraska; his dissertation topic, Environmental And Personal Factors In Secondary Career Choice Of Graduates Of Medical Informatics Training Programs, reflects his ongoing interest in medical informatics.

Bob was an active member of the Medical Library Association, serving as Secretary and member of the Board of Directors from 1972-1975. He chaired the 1976-78 Ad Hoc Committee to Study Interlibrary Loan Practices and Problems, the Library Research Section from 1982-1983, the Committee on Medical Library Technicians from 1969-1971, the MLA/NLM Liaison Committee from 1974-75, and the 1981-82 Search Committee for MLA Executive Director. He also chaired the Program and Convention Committee in 1979-1980 and the National Program Committee for the 1990 Annual Meeting in Detroit. He was a member of myriad MLA committees and task forces, including the Survey and Statistics Committee, the Nominating Committee, the Rittenhouse and Janet Doe Juries, Joseph Leiter Lecture Committee, the 1986 National Program Committee, the Task Force to Evaluate the Annual Meeting, the Task Force on Professional Development, and the Study Group on MLA’s Role in the Educational Process for Health Sciences Librarians. He also served on the National Issues Advisory Council.

He was also involved in various other professional organization including the Association of Academic Health Sciences Library Directors, the American Medical Informatics Association, the Association of Biomedical Communications Directors, the Health Sciences Communication Association, the New York-based Archons of Colophon and the Mid-Continental and New York-New Jersey Chapters of MLA.. He participated in national and regional level programs and committees such as chairing the Regional Advisory Committee for the Greater Northeastern Regional Medical Library Program in 1990-91, chairing the NLM Special Review Committee on HPCC Health Applications for National Information Infrastructure in 1996, and chairing the NLM Ad Hoc Health Sciences Library Consultants to the Long Range Planning Panel for International Programs in 1996. He also served on many other NLM Committees and Panels such as IAMS Review Committees, the Planning Panels on Medical Informatics and NLM Outreach Programs, and the Biomedical Library Review Committee. He served on the Editorial Boards for AAHSLD Annual Statistics and the Journal of the American Medical Informatics Association and was on the Editorial Advisory Board for the Bibliography of Bioethics.

Bob has many publications and presentations to his credit on topics ranging from cost performance analysis, library roles in automation and technology, administration, career choice, and libraries in medical education. He is never shy at expressing opinions, popular or unpopular, and was a member of the MLA Great Debates on The Librarian as Leader in 1992, and Removing/Replacing the Reference Librarian at the Reference Desk in 1994.

Bob has been active internationally, serving as a consultant to the governments of the Czech Republic, Spain, and Armenia, where he has assisted in the development of the Republican Scientific Medical Library of Armenia, the National Medical Library for that country. In 1994, Bob received a Distinguished Service Award from the President of the Republic of Armenia for his contributions. He has also taught or lectured in the Czech Republic, Spain, Italy and Portugal.

Bob has received numerous honors and awards. In 1996, he delivered the Janet Doe Lecture entitled, “On the Origin of a Species: Evolution of Health Sciences Librarianship” Bulletin of the Medical Library Association 1997 Jan; 85(1):1–10. In 1997 he received the Ida and George Eliot Prize as co-author of a series of articles on medical informatics published in Academic Medicine, Volume 70, 1995. He was elected a Fellow of MLA in 1995 and also is a Fellow of the American College of Medical Informatics and of the New York Academy of Medicine. He received the 1986 Outstanding Achievement Award from the Mid-continental Chapter and the 2001 Lifetime Achievement Award from the New York/New Jersey Chapter of the Medical Library Association. He was selected as one of the 100 Most Notable Librarians for the MLA Centennial observation and in 2002 received the Marcia C. Noyes Award, the highest honor given by Medical Library Association.