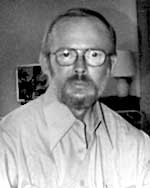 Harold Bloomquist was a librarian at Harvard from 1958-1975 during the creation of the Francis Countway Library of Medicine and the head Librarian from 1968 through 1975. He published many articles on librarianship and is known for his report on the state of medical libraries. Hal was editor of the Bulletin of the Medical Library Association for many years and delivered the 1975 Janet Doe Lecture. Looking at the role of the library and the university he says, "I have never been convinced that the university in our society was the appropriate agency for document delivery...universities do not exist specifically to be efficient...that is not one of their goals.

Hal had a long history of working in libraries before and during library school, and after receiving a Masters Degree in Librarianship at Columbia in 1954, he continued as the reference librarian at the Medical Library at Columbia. He also worked toward a doctorate specializing in scientific and medical library resources. In 1958 Hal went to Harvard as Assistant Librarian for Resources and Acquisitions. The library was then small and unimpressive but this was the beginning of the plan to merge with the Boston Medical Library to form the Countway, "one of the phenomenal medical library tasks of our recent times, certainly on the level of anything that went on in Bethesda."

Already "a regional reservoir library," Countway became the first Regional Medical Library designated under the Medical Library Assistant Act and was able to "overcome...a lot of old-fashioned librarianly type things such as [believing] it is not cost effective to send library materials by first class mail."

In 1963, at the request of the Association of American Medical Colleges, Hal wrote the "Status and needs of medical school libraries in the United States," a report that called attention to the poor conditions of medical libraries. "Making these statistics available couldn't help but have been an embarrassment...this helped call attention to some people who were taking libraries for granted," he says. In the course of the report "there were three things I mentioned that were needed: inspired leadership, imagination, and money.... I think medical librarians as a profession have risen to the requirements [and]... poured the kind of imagination and leadership into the library world that has made huge expenditures of money worthwhile."

Hal enjoyed his Medical Library Association experiences and "found [the Association] useful, most useful, as a common ground on which people with like problems can meet." He found publication a satisfying and important activity, and wrote numerous articles, edited Library Practice in Hospitals, and was associate editor and editor of the Bulletin of the Medical Library Association from 1966 through 1973. As editor he tried "[to represent] the voice of an extremely heterogeneous group." He also found the Association's role in continuing education important since "professional people need nourishment along the way...they need to be renewed on a continuing basis." Also critical, he says that "as a standard setting organization, I think it missed the boat," and "I never became certified myself because it seemed to me to be meaningless."

Hal believes it is important to report his version of events and recorded sections in his interview that he asked to be sealed until 1998. His overall summation of medical librarians today is that "people are not willing to speak their minds."