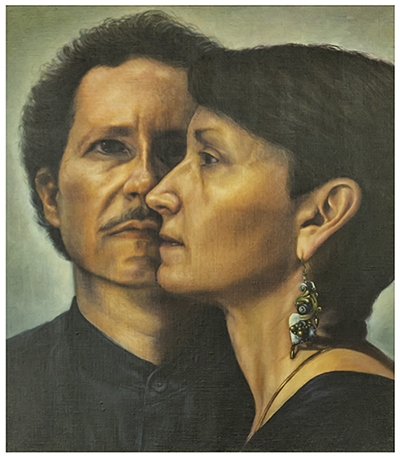 Mark E. Funk, AHIP, FMLA, and Carolyn Anne Reid, AHIP, are recognized for their partnership in medical libraries and contributions to professional associations, where they also carved independent career paths. Funk helped to define the relatively new field of collection development in health sciences libraries, especially as it was transformed by electronic publishing. His public speaking skills and use of social media influenced the Medical Library Association. Reid is noted for presentations and training for online searching and computers and for directing the library at Weill Cornell Medical College. Together, they conducted research that impacted the profession.

Funk and Reid graduated from the same library school at the University of Missouri-Columbia, where she entered medical librarianship with support of a National Library of Medicine fellowship and the mentorship of Virginia Algermissen and Charles Sargent. Reid, followed by Funk, worked at the University of Missouri-Kansas City as clinical medical librarians in the new medical school that employed docent teams to educate students. Reid was the first CML hired for the first CML program, established by Gertrude Lamb at UMKC.

I felt I was just dramatically well prepared…for this new role of working very closely with health professionals in fulfilling their information needs… I still remember my first days of being a CML, when I would walk up to go into the room where the conferences were being held—the medical conferences, the rounds, presentations, and so forth. And I would say to myself before I went in, I’m supposed to be here [laughter].

Funk and Reid continued to work at the same institutions, at the University of Nebraska Medical Center and Weill Cornell, throughout their careers; in both locations, they were hired and influenced by Robert Braude. Funk entered collection development, and Reid moved to online services training in the Midcontinental Regional Medical Library Program and then to administration.

[C]ollection development was still a relatively new concept, particularly in medical libraries… Up until that time, in most medical libraries, the director did all of the selection for all of the collections—books, journals, everything. And, of course, as medical libraries became more complicated, and they needed to take more of their time to work on budgeting, planning, and working with administration, etc., that was one of the duties that was sort of pulled off into this new specialty.

At Weill Cornell (1987-2014 and 1987-2010, respectively), they collaborated with the extensive community of medical institutions in the New York City area (those relationships were also very interesting and complicated, and not the easiest to understand) and with the unique partnerships with Cornell University in Ithaca and Weill Cornell’s new campus in Qatar, requiring complex licensing agreements and innovative procedures in response to the evolution of the electronic collection.

And then, along the middle to late ‘90s, e-journals started appearing on the horizon, and that was a huge environmental change for all of us… [I]t was an opportunity. It was also a challenge… [T]here was all of this heavy lifting that’s going on behind the scenes to make sure that all of these resources that we paid a lot of money for are actually available to our users so they can find them relatively easily… But being a part of Cornell, because of the relationships with Ithaca and Qatar, it was kind of a unique opportunity to really expand our resources much more quickly and much farther than other libraries might have.

Reid oversaw a major renovation of the library building and succeeded Braude as director.

So that was pretty much three years of my life…wandering around, sometimes with a hard hat, sometimes without, in the construction areas, checking things out, following up with people, making sure that things were going according to schedules, and getting the library staff involved in where they needed to be.

They served on the MLA Board of Directors and Section Council. As MLA treasurer, Funk increased the visibility of reports to membership. He helped lead section efforts on eligibility and on centralization of dues collection. He was elected MLA president for 2007/08, bringing social networking and virtual meeting participation to the association. He has been a member of numerous publisher advisory boards.

I think that particularly for a lot of new people, MLA can really intimidate… It’s kind of mysterious how things are done, who gets appointed to things, who decides, etc. And it always seemed to me, at least in those first few years, that it was always the same people you saw up on the stage. There was kind of a hierarchy back then, and you saw a lot of the same people in offices and being appointed to these big, important responsibilities. Retrospectively, I can look back now and I think that the leaders back then were aloof and standoffish. They didn’t really mix a lot with what I would call the regular membership. And I think that has really changed a lot over the years. MLA has become much more democratic.  It’s much easier to get appointed to a committee and then advance in multiple roles in MLA. And the fact that, now, we’ve had a whole bunch of MLA presidents who are not library directors, I think that has made a big difference in the approachability of officers and how much more mingling there is now between officers and the regular membership.

Reid received the Estelle Brodman Award for the Academic Medical Librarian of the Year and chaired the Midcontinental Chapter of MLA and Special Libraries Association chapters.

Funk presented the 2012 Janet Doe Lecture examining changes in the profession through a textual analysis of articles in the Bulletin and Journal of the Medical Library Association.

I would say that whole process, just copying and correcting the text for fifty years of BMLA, JMLA, that took 255 hours to do. Then there was the analysis. I had like 4.25 million data points that I had to look at and put together. So that and the memorization, that was the hardest thing that I think I have ever done in a project. I was really happy with the results, as it turned out.

A study they did together on indexing consistency in MEDLINE in 1983 was used by NLM to improve their procedures, and the article continues to be cited for its methodology.

There’s a quote that has been attributed to Isaac Asimov, but I’m sure somebody else actually said it first—that “The most exciting phrase to hear in science is not ‘Eureka!’ but ‘That’s funny.’” And that was exactly how this happened.

They also collaborated on a study of the usefulness of monographic proceedings that was funded by the first MLA Research and Demonstration Project award. These efforts were characterized by meticulous examination of large amounts of data and compelling presentation of results.

I’d like to be remembered as that funny guy who got things done [laughter]. Specific contributions that I think I’m particularly proud of are our indexing consistency paper, my introduction of social media to the Medical Library Association, and the concept that presentations can be funny and entertaining as well as informational. [Funk]