Looking forward to visiting Seattle for MLA 2017? Why not gear up for the conference by viewing a few movies set and filmed in the Emerald city?

This 1993 romantic comedy stars Tom Hanks and Meg Ryan. Hanks’ character is a widower, who wants to start a new life for his son in Seattle. Concerned about his father, the son calls a radio psychologist, who convinces Hanks to speak on the air about his deceased wife. Ryan’s character, and many other women around the country, are moved by Hanks’ words.

The houseboat that Tom Hanks lives in is a true houseboat in Seattle, and it still exists. You can see it by taking a cruise of South Lake Union. Learn more about the famous house and check out a map of all of the filming locations. 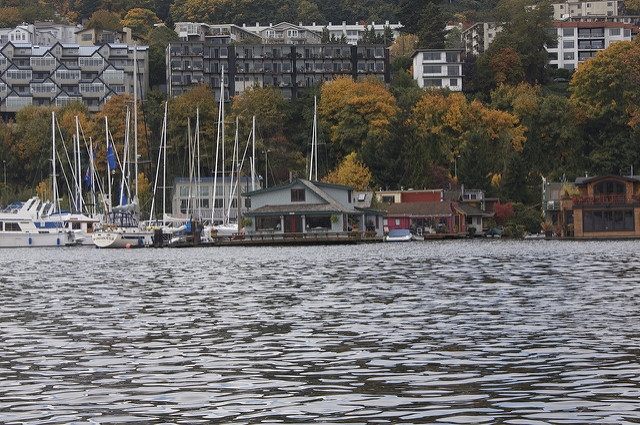 "Sleepless in Seattle houseboat" by hairygrumpy is licensed under CC BY 2.0

10 Things I Hate About You

This teenage romantic comedy is set in a Seattle high school. Loosely based on Shakespeare’s “Taming of the Shrew,” it features two sisters and their suitors. Julia Stiles, Joseph Gordon-Levitt, and the late Heath Ledger are just some of the faces you’ll recognize in this lighthearted film. Filming locations include both Seattle and Tacoma, with shots of the visit worthy Kerry Park and Fremont Troll. Check out more of the movie’s local locations on a map of local filming sites.

This 1992 film focuses on the residents of a Seattle apartment building as they search for love. Writer and director Cameron Crowe called it “the story of disconnected single people making their way, forming their own unspoken family.” Set against the backdrop of early 90’s Seattle and its grunge music scene, you may recognize bands Soundgarden, Alice and Chains, and members of Pearl Jam. Included in the film is local favorite Gas Works Park. Check out a map of Seattle sites in the movie.

The Hand that Rocks the Cradle

Don’t care for romantic comedies? You may be more interested in this thriller set in Seattle, where a vengeful widow seeks to hurt the woman she sees as responsible for her losses. This film highlights the beautiful Volunteer Park Conservatory. The house where most of the action takes place is set south of Seattle in Tacoma, but you can see the Dr’s House in Seattle.

For more films set in Seattle, visit http://seattle.cbslocal.com/top-lists/best-movies-set-in-seattle/ and http://blog.seattlepi.com/seattlefilmbuff/2008/09/28/my-top-ten-seattle-movies/ . For an extensive list of movies filmed in Seattle, visit Seattle.gov’s film history.