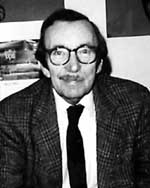 Scott Adams worked at the Army Medical Library and the National Library of Medicine from 1945 to 1959 and from 1960 to 1970 and was intimately involved in the development of MEDLARS. He served as president of the Medical Library Association from 1967-1968 and president of the American Documentation Institute in 1955. A major player in the development of automated bibliographic retrieval, Scott predicted in 1980 "there will be new demands on delivery of health services [and] more and more we will be an information oriented society...you've got to have document availability to complete the job."

Scott graduated from Library School at Columbia in 1940 and came to the Army Medical Library in 1945 as Head of Acquisitions. His job was to "revitalize the book buying activity.. and get rid of all the duplicates." In 1946 Scott was made "The acting The librarian...that of course has given people fits, the use of two articles." This was a period of change and tension at the Library, including change in its reporting structure, major personnel changes, closing the Index Catalogue, development of the W schedule, changes in the production of the Current List, move to automation, and plans to move to a new building. Scott comments, "this whole story has never been told and it's so complex...it would take an honest historian and three years to dig up the documentation."

In 1950, Scott went to the National Institute of Health Library which was carved out of a scientific laboratory, "the only library in the country with eighteen showers." It was a time of vastly increasing publication load and Scott feels that his "principal contribution was in building up a collection to make it solid." He then moved to the National Science Foundation Library where he worked with the PL480 journal translation program.

By 1960 Scott was back at the National Library of Medicine to work as Deputy Director of the extramural program and then as Deputy Director from 1964-1970. He saw the library respond to the need to support research and the new, growing emphasis on education. He was involved in the new MEDLARS system and took the stand that "you build a flexible database that can be used for multiple supplemental purposes."

His first Medical Library Association meeting was in 1946 when "it was a club of very congenial people....most of the members were librarians of medical society libraries...none had very much money." Scott worked on the Medical Library Association bomb plan to "create shadow libraries in caves for safety," and takes credit for distributing printed annual reports rather than the "interminable sessions where you would call on each committee." Never shying away from controversy, he initially opposed certification as "a little on the trade union side," opposed standards because they "might not prove to be high enough for the calling...and might hold the profession down," and opposed too many special interest and geographic groups "on the principle that [they] tend to drain energy." As president in 1967-68 he saw his role as "trying to bridge the gap between the government's programs and ...the medical libraries."

Scott's book Medical Bibliography in the Age of Discontinuity in many ways reflects the scope of his career. It describes the rise of biomedical science, growth of the National Institutes of Health, coming of computerized information and the conversion from pure science to include social, environmental and ethical issues. For the future he wonders "where are the forces now, where's the umph coming from...who's going to have the powers that are going to make a coherent growth in the whole field?