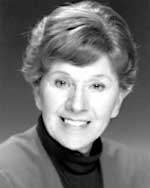 Erika Love was director of Medical Libraries at the Bowman Gray School of Medicine in Winston Salem-North Carolina and the University of New Mexico Medical Center and worked at the National Library of Medicine during the development of MEDLINE. She was president of the Medical Library Association in 1977-78 and presented the Janet Doe Lecture in 1987. Erika enjoyed being present at the beginning of new areas of librarianship, a career with which she says “ I have never been bored and always found fascinating.”

Erika credits her days as a Library Assistant for Amerika Haus in Darmstadt, Germany, after World War II with her early fascination with libraries. After coming to the United States and earning her degree from Indiana University Library School, she worked at Larue D. Carter Memorial Hospital, a new psychiatric hospital, from 1953 - 1967. “I learned more [at Carter] than at any time since...about how to deal with people and the administration and my own employees.”

In 1967 she became director of the Medical Library at Bowman Gray where she reclassified the collection using the then new Medical Subject Headings, and became very involved in education and resource sharing. In 1972 she went to the National Library of Medicine. In the 1960's and 1970's “an adversarial relationship existed between people in the field and those at the National Library of Medicine...[and] the National Library of Medicine felt that bringing in a practicing librarian would benefit them.” She had the “distinct privilege...of watching from the inside the development of issues that turn[ed] into national and worldwide trends.” One of her projects involved establishing the first experimental stations for the new MEDLINE program. After five-and-a-half years Erika says she “became homesick... for the academic community, the need to see a medical student walking through the library,” and moved to Albuquerque as Director of the University of New Mexico Medical Library. The same year she was elected Medical Library Association president.

Erika was also committed to the importance of oral history and implemented programs for the Medical Library Association and in New Mexico. She was the first chair of the Medical Library Association Research Committee and comments that “a profession that ignores the research component will become an appendage to other professions....” She also chaired the Joint Task Force to Develop Guidelines for Academic Health Sciences Libraries which she feels “recast the role of the library as a partner...a support for the mission and goals of the parent institution.”

She says that throughout her career, “I never [told] people I was an information scientist...I've always been happy to say 'I am a librarian.'”