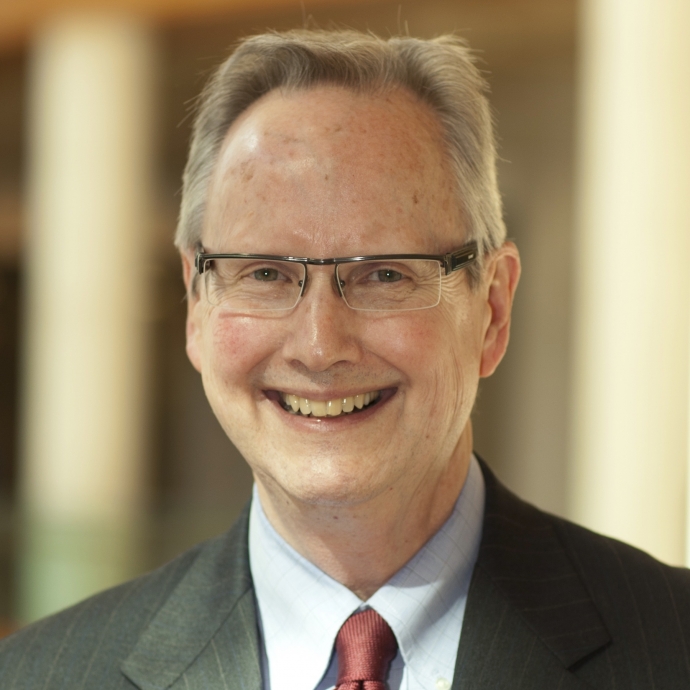 J. Michael Homan, AHIP, FMLA, is renowned throughout the health sciences library community for his consummate interpersonal and organizational skills, exceptional delivery of information services in diverse environments, and commitment to continuous innovation. His lifelong interests in information retrieval, online training, and access to biomedical literature have been threads in his career. His contributions to publishing, the role of the librarian, and knowledge management are rooted in his belief in the importance of volunteerism.

I think one of the things that I learned… was that even though I had a great respect for libraries before graduate school and UCLA, I didn’t have an appreciation for their important role in society, not only their general role in society, as great research libraries functioned, or the national libraries, or the public libraries. But I didn’t have a great respect for how important they are in the advancement of disciplines, like medicine or sociology, or whatever discipline it happens to be. That, I think, was really important to understand… And I think it was the realization, too, that I was not being trained just for a job, although a job is needed… But it was the basis of a real profession. It was the difference between a job and a profession, and a profession that could be entirely stimulating and interesting.

He was hired as a MEDLARS search analyst at a time when the National Library of Medicine was transitioning from batch process searching to online searching. He attended the first MEDLINE class at NLM in the fall of 1971 and became a preeminent MEDLINE trainer for the Pacific Southwest Regional Medical Library Service, as UCLA assumed responsibility for training librarians for the western half of the nation.

Louise automatically sees the writing on the wall, long before many people, and she recognized that the UCLA region included Hawaii, California, Nevada, and Arizona, a huge geographic region with millions and millions of people. Hundreds of basic unit libraries—hospital libraries—and quite a few Resource Libraries as well. And she realized that if training was only going to occur at the National Library of Medicine, it would impede the development of the western region significantly, because it’s very expensive to send someone to Bethesda for three weeks… So that’s why she said we’ve got to have a training program here… [and] arranged to have the first MEDLINE training class outside of NLM…

Homan’s next positions continued to give him experience in contrasting settings, where he repeatedly juggled many concurrent roles and responsibilities. He was head of information services at The Upjohn Company (1979-1988) in Kalamazoo, MI, which presented the opportunity to work in a sophisticated IT environment in support of pharmaceutical research and development efforts.

It was very research-intensive, which was just a revelation to me as well, because I’d never worked, necessarily, in that kind of environment. And then very, very product driven. Everyone understood that it was the scientists and patent attorneys and everyone that was working towards being able to market an efficacious drug. The niche of the library was a perfect fit for that, both in the print world and later in the online indexing world.

As assistant university librarian for the sciences at the University of California, Irvine (1988-1994), he was responsible for the planning and construction of a new consolidated science library, but was also presented with the challenge of adding other major administrative responsibilities due to campus personnel issues.

These experiences culminated in the invitation to become director of libraries at Mayo Clinic in Rochester, MN, where he served from 1994 until his retirement in 2014. He provided leadership for information needs at multiple geographic sites, introducing automation and reorganizing services and staffing schemes.

I really felt that I needed a great group of people, to pull them together, to advise me and kind of tutor me, if you will, in this new environment… We created the library advisory committee and had some very powerful people on it, so that when we went for funding, we were pretty assured through this advice that we were going to be funded… I really kept the library advisory committee in place for twenty-one years, all the years that I was there.

Homan served as president of the Medical Library Association in 2000/01 and of the Association of Academic Health Sciences Libraries in 2004/05.

From the get-go, it’s volunteerism. I’ve just enjoyed being of assistance. It’s not like I had to be in charge of something; it’s just like, I need to help out. I didn’t need to do these volunteer activities to advance academically. I didn’t need to do these things to have additional salary. It just was something that I thought was very important for me, individually, to do to help out my community.He was

MLA’s managing editor of books from 1990-1996 and editor of the Bulletin of the Medical Library Association in 1996-2000. He promoted early steps to move toward electronic access to the table of contents and subsequent full online content of the journal through PubMed Central.

[O]ne of the big issues that I was terribly interested in was the fact that I had been editor of the Bulletin for four years, and all during that time I had been pressing MLA and the board to at least make the table of contents electronic and to move forward with that… I was so elated, because I had worked for so long to do something digital with the Bulletin, and all of a sudden, because PubMed Central came into place, we could actually do it. I was really, really pleased about that.

if you look at the whole continuum, the contributions of NLM have been gargantuan, not only to medical libraries but to the advance of science in general. Just unbelievable—the NCBI, in particular... To keep going forward and being visionary, as Don Lindberg has for all these years, I think is just nothing short of extraordinary.

and the editorial board of Academic Medicine. His Janet Doe Lecture in 2009 analyzed the critical role that mediated information services play in the evolving digital ecology. He is an MLA Fellow and was honored by the association with the Carla J. Funk Governmental Relations Award in 2011, the President’s Award in 2014, and the Marcia C. Noyes Award in 2015. He served twice as a mentor in the NLM/AAHSL Leadership Fellows Program. On the international scene, he was an elected delegate to the International Federation of Library Associations and Institutions (IFLA) Health and Biosciences Section.

[I]t’s not just about publishing digital content; the whole point is to advance medicine, advance science, advance civilization. In order to do that, you have to mine that literature, and the librarians are going to be terribly important—are now and in the future are going to be terribly important to that future… It’s making sure that the knowledge ultimately can actually be used for betterment, that the clinical problems that are occurring can be quickly answered and solved with digital content. I think librarians have a huge role to play in that.