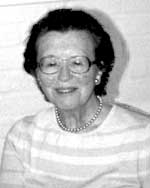 Louise Darling led the University of California at Los Angeles Biomedical Library from 1947 to 1978. She was a leader in education for librarianship and innovative uses of computers in libraries. Louise was president of the Medical Library Association 1963-1964, Janet Doe Lecturer in 1973, received the Marcia C. Noyes award in 1974, and was elected a Medical Library Association Fellow in 1978. When asked about the amazing amount of work she accomplished, she comments: “People spend an awful lot of time agonizing over decisions...you mostly just have to get things done and I hate to sit around talking about things when they have to get done.”

After earning degrees in Botany and a certificate in librarianship in 1936 from the University of California at Berkeley, Louise was a librarian at Acalanes Union High School, a reference assistant at UCLA and then with the Army Library Service in Hawaii and the Philippines during World War II. She returned to lead in creating the Biomedical Library for the department of biology and the new UCLA medical school in 1947. There was no building and little in the way of a collection, so she worked acquiring materials and planning and constructing a new building that finally opened in 1954. Louise is known for her concern for staff because she says, “staff make or break the library.” She advises against different status for the library director and the staff and advises that a director should “pick out people who really like to work together.”

In the 1950's she began a life-long interest in education for medical librarianship and the promotion of library internships: “There was, is, and always will be a shortage of the best people [in librarianship] and internship is one way of attracting some of those to the health sciences field and giving them a boost forward.” Louise counts as her most important contribution “the people that have gone out into the field either from our training program or from work experience in our library.”

Under her leadership UCLA was one of the pilots for MEDLARS in 1964 and one of the information analysis centers of the Neurological Information Network and the Brain Information Service. In assessing library involvement in automation and computer activities she comments that “we have to try to keep abreast of new ideas...and be ready to move into a new area...[but] we have to be careful not to hang onto things when something better comes along.” She joined the Medical Library Association in 1948 and was involved in committees on recruitment, library internship, and international cooperation. She was on the Board of Directors in 1961-62 and president in 1963-64. “Some years it gets more done than others...it has its ups and downs but for the most part it...has moved steadily ahead and has been an important force in the field.” She also was active in many other organizations such as Association of College and Research Libraries, Health Education Media Association, American Society for Information Science, the Special Library Association, state library associations and the American Association for the Advancement of Science: “we can't be oblivious to what other segments of the field are doing...and I wanted to have my own copy of Science.” Her 1973 Janet Doe lecture focused on certification. Louise comments that “I've never been wildly enthusiastic about certification...being certified doesn't mean you're better.” However, she goes on certification “has been instrumental in that goal ...[of] improving the quality of medical librarianship... [and] it indicates professional commitment.” She adds that she herself is not certified.

Louise also spent over 20 years consulting on all aspects of medical librarianship with institutions in places as diverse as Hawaii and Honduras, a role that “sounds glamorous but that glamour goes very fast.” She felt it “a big responsibility to be giving people advice if they're paying for it.”

For librarians today she says, “We have to take the opportunity...to expand library services and share materials...entering into a variety of activities...I don't belong to the school of people that think libraries will vanish.”