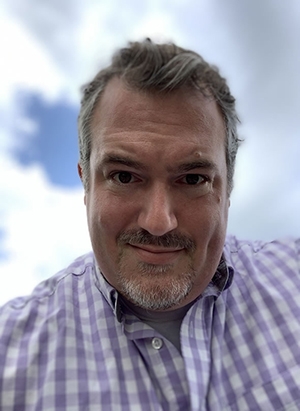 Submitted by A. David Lewis; edited by Donald Pearson, AHIP

A. David Lewis is an American comic book and graphic novel writer. He is also a comics scholar who focuses on literary theory, religious studies, and graphic medicine (Wikipedia biography, Caption Box: The Homepages of A. David Lewis). He recently worked on the New England Graphic Medicine Conference, which included virtual workshops, presentations, and panels on a range of topics, including early discussion of COVID-19. The Graphic Medicine website has a page of COVID-19 comics.

Second only to issues around mental illness, cancer ranks as the most frequent disease addressed by comic books and graphic novels. In some ways, this focus makes sense, given how many individuals worldwide are touched by all forms of this ailment annually. In other ways, it could be regarded as odd that cancer, often a hidden or covert malady, is so often featured in an exclusively visual medium. Regardless, cancer’s multitude of depictions in comics creates a rare opportunity for curating a collection that can be utilized by patients, caregivers, and clinicians alike.

The challenge here is not in locating these comics, nor purchasing them, but in responsibly deploying them. The aim of such a collection could be to develop sensitivity both to the anxiety and to the rigors of cancer treatment, to provide relatable characters with whom and circumstances with which patients can identify, to expand the communications channel between clients and clinicians, to visualize what may be unfolding internally, or, simply, to entertain and distract. Any of these are worthwhile goals, but they must be chosen consciously, not haphazardly, for the given circumstances.

In 2018, Lewis proposed some basic categories for, generically speaking, what we might call “cancer comics”: Fictive, Familial, Experiential, and Clinical. This offers a start to useful groupings to match with readers. Fictive will provide some distance from real life and the story, though librarians should always be cautious about appropriate reading levels and ages, obviously. Jim Starlin’s The Death of Captain Marvel, while a fictional superhero story, contains no happy ending and, thus, should not be given at random to children and adolescents.

Likewise, while Familial books focus on the observations and emotions of those surrounding a cancer patient, they are not for just any family member. Mom’s Cancer by Brian Fies comes from the vantage point of a grown son estranged from his father, while Seeds by Ross Mackintosh differs by being another grown son’s account of his dear father’s decline.

Just as a work can span more than one category (e.g., Our Cancer Year is as much Familial as Experiential, being a collaboration between Joyce Brabner, Harvey Pekar, and Frank Stack), it can also achieve multiple aims. This versatility should be taken as an opportunity, not a reason for deterrence against such a collection.

There is the further obstacle, though, of how such collections should be shared: For instance, should a $20 Spider-Man trade paperback be passed around from ward to ward, tracked not only for the sake of inventory, but also for contagion? To mitigate the infection control issues such a collection might pose, the adaptability of digital comics should be championed here. Whether it is laptops, iPads, or, perhaps more affordably, Nook, Kindle Paperwhite, or Samsung tablets, the ability to control both the content and the germ-load of such devices makes this an appealing solution.

Companies such as Comixology (owned by Amazon) allow customers to purchase selections from a number of the major comic book companies through their free app. When a storyline or character arc runs across several volumes of a comics title—like superhero Jane Foster’s battle with cancer—Comixology is the best solution in term of cost-efficiency and organization. However, for prestige graphic memoirs like Marisa Acocella Marchetto’s Cancer Vixen, Kindle corners the market, making them a necessary complimentary service.

Beyond those two high-profile applications, an abundance of relevant web comics are available through the average browser. They can be linked to for reading or, better yet, saved as complete web pages or portable document format files (PDFs) for offline reading. And, from educational and inspirational perspectives, the archives of a comic like Cancer Owl, with its creator now in remission, speak to a hope for survival even alongside contemporaneous web comics that illustrate the struggle.

The difficulty in building a collection of cancer comics is not the availability, the number, nor the quality of books from which to choose. The problem is just that: making the choice. No librarian, educator, or clinician wants to be the one who wastes money on low-quality purchases that are either lost, stolen, or harmful to their audiences. Hopefully, that choice becomes all the easier and feels all the more promising with the following recommendation list, a “starter pack” of sorts, by distribution channel and notated by category.