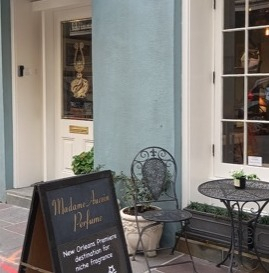 About the “My New Orleans” Blog Series:

MLA Members in New Orleans would like to highlight the city of New Orleans, its culture, and attractions. This blog series aims to share interesting places to visit and things to do while visiting the city for MLA.

I love cologne. In the right place and time, it can make the perfect statement. (Nota Bene: the right to breathe is more important than the right to wear scent.) One of my happier moments was in finding a shop in the French Quarter, Madame Aucoin, that specializes in niche (mostly) fine European fragrances. The shop is small and is in the front room of what used to be the living suite of Billy Monteleone, the third-generation owner of the Hotel Monteleone (home of the Carousel Bar—it rotates around the bartenders’ station), fronting the block on Royal St.

The proprietor, Jay Caillouet is the great-nephew of the original Madame Aucoin, who opened a perfume shop on Royal in 1910. (FYI: in the early 20th century, the honorific for a woman entrepreneur was “Madame.”) For over 70 years, there was an Aucoin perfume shop in the Quarter. There was a brief hiatus, beginning in the 1980s, without a Madam Aucoin in the Quarter, but Mr. Caillouet revived the name and tradition in the 2010s.

You won’t find Dior, Chanel, Guerlain, or mass-marketed drugstore colognes at Madame Aucoin. It’s mostly small indie houses such as État Libre d’Orange, a French house that alternates between outrageous, outraging, and sublime (I have six of their scents!); the French wife-and-husband house, Memo, who have, most notably, produced regional cuirs (leathers) from around the world; Eight & Bob, whose original scent was worn by RFK and JFK; and Mojo Magique, started by Louisiana natives Doug and John Kennedy.

I love spending time in the shop. It’s cozy, focused, and friendly. If you ask for a sample, you will not be questioned or sniffed at.

The store is located on Bienville St in the French Quarter, between Chartres (pronounced “Charters”) and Royal (pronounced “Royal”), about a 15-minute walk from the Hilton Riverside.

Not far off are a few of my other favorite places: the aforementioned Carousel Bar at the Hotel Monteleone, Le Boozé at The Royal Sonesta Hotel (a great place to sit and watch Bourbon Street traffic with a cocktail, but sit away from the street so it’s harder for people to ask for money, tell you their life stories, or try to come home with you), Felipe’s Mexican Restaurant (they will deep fry your burrito), and Beachbum Berry’s Latitude 29 (rum and orchid garnishes).