I Am MLA: Carrie Forbes 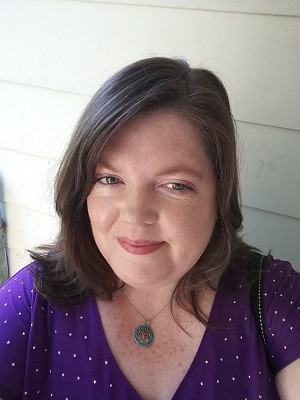 Submitted by Carrie Forbes; edited by JJ Pionke.
You could be featured next! Submit your profile today.

I primarily work with undergraduate nursing programs at ECU. I teach library orientations, basic research classes, and APA 7th edition classes. I'm considered the local APA expert on our campus, and I also serve on many different committees, both within the library and within the College of Nursing. I am passionate about Diversity, Equity, and Inclusion initiatives, Indigenous Peoples validation and rights, and working to break down the barriers of systemic racism.

It was finally the "role" that made the most sense to me. In many ways, I never knew what I wanted to be when I grew up. My undergraduate degree is in Religion & Philosophy, and after that I went to community college for a nursing degree. In my last semester of the nursing program, I realized the library was really where I wanted to be. Soon after that I was hired by Laupus Library as the Interlibrary Loan manager. I worked in that role for nearly fourteen years. I never felt confident enough to apply to library school, until I worked under Christine Andresen. She mentored me a great deal and helped me to know that even with a learning disability, I could probably do very well in a graduate program. I applied to ECU's newly accredited MLS program and got in.

I feel like I had a solid background in libraries before I became a professional librarian. I worked for five years at Barton College Library as the circulation manager and a weekend "librarian," then I worked at Laupus Library in Interlibrary Loan and Access services for nearly fourteen years, and now transitioned to being a Liaison Librarian for the College of Nursing at ECU for the past two-and-a-half years.

Some of the work I am most proud of, since becoming a librarian, has been serving on a departmental diversity committee. In just two years, the committee members have worked tirelessly to move from "program-based" work to "action-based" work to try to begin to dismantle systemic racism within the department. Right now, on a subcommittee, we are working on creating a transparent system for students, faculty, and staff to report incidents of racism, so that action can be taken to educate and inform the offender, while also protecting the complainant from any class or work retaliation. Our hope is to offer students, especially, a safe way to make their voices known, and to know that action will be taken in return. We want their voices honored, heard, and respected. I feel like this will help to create a much better environment for all future students.

I would love to visit Ireland, China, and India. I would also love to get back into community musical theater!

I love listening to audiobooks, going on short weekend trips to the mountains or the beach, and I LOVE LOVE LOVE musicals. One of the few positive things about having so much extra time at home during COVID was that I rediscovered my love of musicals. Some of my favorites are Les Mis, Hamilton, In the Heights, Dear Evan Hansen, You're a Good Man Charlie Brown, Joseph and the Amazing Technicolor Dreamcoat, The Sound of Music, and Newsies.

My favorite new movie is Cruella. The fashion, the art of the filming, the story, and the acting is all so good!

Five words to describe you:

Before I became a librarian, I wrote five gluten-free cookbooks that were published by what is now Simon & Schuster. You can find them on Amazon.