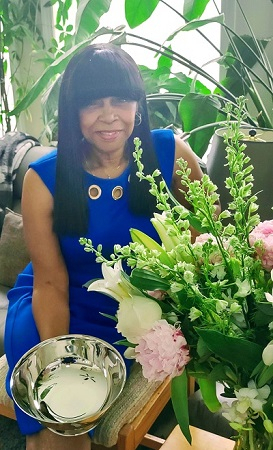 Murphy (pronouns: she/her/hers) has been a librarian for forty years. Since 1983, she has worked for the Duke University Medical Center Library & Archives in a variety of roles, including user education coordinator and head of reference services. Murphy’s commitment to being a positive influence on the medical librarian profession is demonstrated through years of volunteering and mentoring others. The following is a list of some of Murphy’s elected and appointed leadership positions:

At the heart of Murphy’s commitment to serve and support health sciences librarianship is the desire to promote and bring awareness to diversity, equity, and inclusion in the profession. One colleague shared, “As a founding member of the African American Medical Librarians Alliance (AAMLA) Caucus, she has paved the way for African American librarians during a time when MLA was not working toward inclusive excellence and when leadership opportunities for African American librarians were limited.” Additionally, Murphy identified a need to cultivate a collective understanding that “we are MLA” in the organization and established the “I Am MLA” campaign in 2020, which serves to network and promote MLA and its membership.

With a career punctuated with many achievements and professional firsts, Murphy has always mentored colleagues and provided paths for others to also find success in the profession. Just as Marcia C. Noyes was a pioneer in the profession in her day, Murphy too is considered a trailblazer by her peers. A few of her notable MLA accomplishments are listed here:

Murphy continues to make certain that MLA is an association where all members have a voice and feel appreciated, included, and valued. As noted by a colleague, “Beverly’s greatest contribution to medical librarianship has been her care for the people who constitute the profession and our organization, her compassion for the wildly different needs of everyone she meets, and her desire for inclusion.”