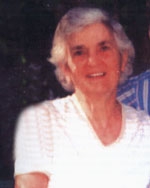 Dorothy Whitcomb grew up in India where her father set up the first agricultural engineering program at Allahabad University. She graduated from Woodstock School in Mussoorie, U.P. India, and attended the College of Wooster in Wooster, Ohio, graduating in 1947 with a degree in Chemistry and Biology. From 1950 to 1973 she was a missionary with the United Church of Christ’s United Church Board for World Ministries. After raising a family, she attended library school at Drexel University, receiving a Master of Science in Library Science in 1974.

Dorothy was the historical librarian with reference responsibilities at the Middleton Health Sciences Library at the University of Wisconsin from 1975 until her retirement in 1991. During her career, she earned certification in Preservation and Archives through the library school at the University of Wisconsin and led the Preservation Committee activities at Middleton. She authored numerous articles and presentations on history of medicine and preservation.

Dorothy has been a Distinguished Member of the Academy of Health Information Professionals since 1989.