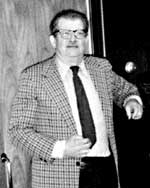 Donald Washburn was the only dentist to be president of the Medical Library Association. He led the American Dental Association Library beginning in 1949 and was active in recognition and promotion of dental libraries. He comments that “librarianship is just like dentistry really, [both are] quite different from what they were when I started out [but] you still have to be willing to provide service.”

Don had a positive introduction to libraries while attending the Northwestern University Dental School in Chicago, and shortly after graduating in 1941, he “began to realize that I preferred my dentistry on paper.” He thus went back to earn a bachelors degree at the University of Chicago Graduate School of Library Science. After school he went to the John Crerar Library and worked on science research bibliographies and received training in all areas of science literature. He was “impressed by the triumvirate of Danes that ran the Crerar Library.”

In 1949 he joined the American Dental Association Bureau of Library and Indexing Service, where “I was exhibited for some time as being a dentist with a library degree.” The Association had been involved with the Index to Dental Literature since 1921, but Don introduced the use of the electromatic typewriter for production and by 1950 the index began to come out quarterly and cost was reduced to $15.00 per year; “it wasn't very long before every [dental] library was getting it, not only in this country but also abroad.” Under his leadership the Association worked with the Federation Dentaire Internationale to index foreign dental journals and in 1965 joined with the National Library of Medicine to include indexing to dentistry in MEDLINE.

Don worked with the dental nomenclature conferences to create The Vocabulary of Dentistry and Oral Science. He also was active in dental education, the first conference of dental school librarians, and later with writing criteria and guidelines for dental school libraries for the Council on Dental Education.

He joined the Medical Library Association in 1949 and was part of the Dental Section that revised the Black Classification system for dental materials in 1952. Among his Medical Library Association activities he served as business manager for the Bulletin of the Medical Library Association, Treasurer in 1967-69, Chair of the Committee on Standards in 1959 and president in 1970-1971. As president-elect he created the Digest of Official Actions of the Board “because I had wondered in the past where people found out what happened.” He also supported the organization by teaching continuing education courses in dental literature and chairing the 1962 convention committee. Don felt that it was critical to support a professional organization and comments that “I feel disgusted when I see how many people refuse, actually refuse to vote.”

He sees computers as useful tools, but notes that “you still have to put what resembles a document into the hands of a person...maybe it's on a screen but they still haven't replaced reading, and in working on a computer, by golly, you're typing.”