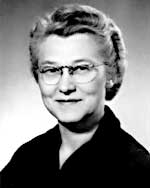 Wilma Troxel led the Chicago-based medical library of the University of Illinois, now known as the Library of the Health Sciences, for thirty-six years. She was President of the Medical Library Association from 1954-55 after serving on a number of committees and on the Board of Directors. She authored the chapter on cataloging for the second edition of the Handbook of Medical Library Practice, which was used as a textbook for the growing number of Medical Library Association certification courses. In 1976, Wilma completed A Catalogue of the Rare Book Collection in the Northwestern University Dental School Library which was funded by the National Institutes of Health. She was a presenter at the First International Congress on Medical Librarianship in 1953 and was a consultant for four months in Chiang Mai, Thailand under the auspices of the Agency for International Development.

Wilma held university degrees in the sciences and library science. Her first professional positions were at her undergraduate and graduate institutions: Illinois Wesleyan University and the University of Illinois at Urbana-Champaign. Her administration of the Medical and Dental Library, as it was known when she first arrived in Chicago, coincided with a period of steady growth in the collections, which expanded to include pharmacy and nursing, and in staff size, which increased from two to more than twenty in larger part due to the increase in reference services.

Wilma's activities on the issue of medical librarian education went beyond her work on the standards and internship committees of the Medical Library Association. Although Wilma did not believe she had the necessary resources for such a labor-intensive internship program as was offered by Mary Louise Marshall and Eileen Cunningham, she did cooperate with Frances Jenkins at the library school in Urbana to provide a practical experience for students taking the medical librarianship course. The experience was actually a series of lectures to the entire class which spent a week in Chicago. Staff librarians discussed the way the library operated and contrasted its methods with those used elsewhere. Her paper at the First International Congress was "The Future of Medical Library Education in America." Wilma was on a panel chaired by Mary Louise Marshall and which also included Estelle Brodman and Mildred Jordan. In another venture with Frances Jenkins, Wilma was co-director of an Institute on Developments in Medical Library Administration in 1962, which was held at the Medical Center campus in Chicago. By design, it was attended by twenty-five practicing medical librarians with little administrative experience. "The institute was planned as an aid in strengthening the capacities and professional skills of medical librarians to better meet on-the-job requirements, and aimed to provide concentrated study of current developments in the overall management of the library."

While Wilma was concerned about the preparation of future medical librarians, she was not one to overplay the distinctions between types of libraries. She saw common ground in the management of libraries regardless of type although there were differences in systems and the literature involved. This is also reflected in the work of the Committee on Task Analysis for the Medical Library Association, which she chaired. "Task analysis was the enumeration of the jobs which were performed in different departments and this goes back to a similar analysis by the American Library Association...The intent of the MLA's analysis was to see if the analysis of positions could be applied to MLA libraries, and we discovered that it could, but with a few [minor] exceptions."