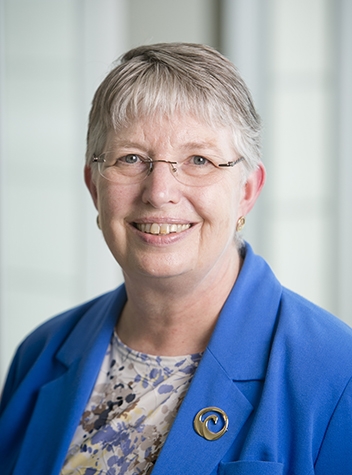 Patricia L. Thibodeau, AHIP, FMLA, spent twenty-four years at the Duke University Medical Center, where she was associate dean for library services and archives. Under her leadership of hospital, AHEC, and academic libraries, staff managed challenges ranging from downsizing to rapidly expanding programs and technologies. She is recognized nationally for her contributions to professional associations in scholarly publishing advocacy and leadership development.

Thibodeau was interested in a career in librarianship from an early age, as she observed librarians and the operation of libraries.

I just really enjoyed the organization and the detail. And those folks were just really wonderful in terms of teaching me their world. I don’t even remember their names; I just remember I spent hours in the library when I wasn’t in class and I had a really great time… I went off to college and that’s what I was going to do. I knew I wanted a degree in college that would prepare me for becoming a librarian.

I also came out of there really understanding politics. First of all, I got to work with…two women administrators…which was unusual in health care administration at the time. They taught me that women could be administrators and women could hold their own. But they also shared with me…the politics and the political situation they had to maneuver being a woman, but also working in a very complex kind of environment.

In 1983 Thibodeau undertook new challenges at the Mountain Area Health Education Center in Asheville, part of the North Carolina AHEC Program. She oversaw outreach to hospitals and health professionals in a diverse sixteen-county region and earned her MBA from Western Carolina University.

[I]f you’ve seen one AHEC, you’ve seen one AHEC, and that was it. Each one was different… But that was also the richness of the AHEC system: everyone learned to do things that met their regional needs, and so I learned a lot about aligning your organization and your library to what your users wanted and needed—and not to what I thought was best.

She next moved to Duke in 1993, and as associate director, acting director, and director, she influenced the library’s alignment with the institution and worked collaboratively with Medical Center deans and university librarians in new areas such as the medical curriculum. She dealt effectively with challenges including staff layoffs and changing roles and built a staff able to function independently with faculty. She was open to new technologies and successfully implemented them as they transformed libraries.

[T]hat’s what kept me at Duke for twenty-four years, because there was always something going on. It was a great opportunity to find things the library could fit into…really get involved in curriculum, not just at the reference desk telling students how to do their research paper, but to actually get involved in things that were going to make a difference long-term, that were going to interweave us into the operations of lots of different groups.

I think that I was able to see things that other people didn’t see, see opportunities, which is not what the library had been doing for years. As we hired new people in, that became a shared responsibility, because…people who I brought in to work with me, really started to have that perspective of, let’s find opportunities, let’s find integration… It was probably bringing the staff into a more visible role and making them think about how they could be integrated in the institution—and aligning us to the institution.

Thibodeau was introduced to the Medical Library Association through the Hospital Library Section.

Whenever you take a leadership role or get involved in associations, you just meet so many more people and get to learn so much from so many different experiences they have. And you get to take bits and pieces of what they’re doing, and see, how does that apply at my job, or how does that apply in my institution… [I]t was also a great training period for me to be, how do you be organized when you’re working with people across the country. How do you collaborate with people who may have very different backgrounds and very different outlooks.

She was elected Section Council chair and to the Board of Directors and as president in 2003/04. She led the association in attention to global issues, advocacy for the value of hospital librarians, and governance changes. “A theme throughout my year as president was value… focusing on the value of librarians, and their feeling powerful and feeling that they are valued.” MLA recognized her twice with the President’s Award, which she jointly received for contributions to scholarly publishing and bylaws.

She also served on the Association of Academic Health Sciences Libraries Board of Directors and as president. Her work in scholarly publishing continued with AAHSL’s Chicago Collaborative, encouraging communication with publishers,

Having the dialogue, so we could actually look at the publishers… In recognition that we serve the same people, their major audience—this was always so shocking to me—was our faculty members who were authors, and to realize that, and then for us to look at each other and go, we’re trying to reach the same group.

and through advising the National Library of Medicine and National Institutes of Health on PubMed Central and the NIH Public Access Policy. Thibodeau also was involved in AAHSL’s leadership development programs for future directors and new medical schools.

I feel that leadership in a library is really, really important, and we haven’t trained our librarians well enough to be leaders. I was really committed…to work on leadership and promoting that. And I actually feel that we should be better about getting mid-level librarians better trained, too, to be leaders, because they are leaders.

Library education ignored really training us in being leaders. And then they did not train us at how to operate in a complex environment with other administrators. We were the social good who would always be funded, and that’s no longer the case. So, we’ve got to be smart and resilient.

She served as mentor three times in the NLM/AAHSL Leadership Fellows Program, and after her retirement from Duke in 2017, she assumed the position of program director.

I think there’s that piece of my career, where…I’m bouncing from project to project, getting them up, getting them going, getting things with partners, okay, pulling out, doing this, this is a new opportunity, let’s get this going and this going. It’s sort of this swirl of stuff. And then you’ve got the outer world that’s swirling around you, too.