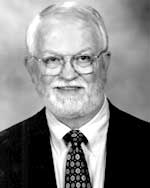 Fred W. Roper has had a major impact on medical librarianship as a scholar, educator, and active member of the Medical Librarian Association. Fred became a member of MLA in 1962 and has been actively involved on MLA committees and in governance of the Association since that time. His primary interests have been certification and accreditation. He was directly involved in the development of the Academy of Health Information Professionals (AHIP) program and chaired the Knowledge and Skills Task Force that was responsible for issuing the Platform for Change. Fred served as President of the Medical Library Association from 1994-95, after serving as a member of the Board of Directors for several years. He became a MLA Fellow in 1997 and received the Marcia C. Noyes Award in 1998. Fred has also been actively involved in the Special Libraries Association (SLA) and was appointed Fellow in 1989 and received the SLA John Cotton Dana Award in 1999.

Fred's interest in libraries began at an early age and many of the librarians he interacted with early on influenced his decision to go into librarianship. He reminisces, "I went to the library a good bit, and I read quite a lot. Miss Ann Sample would let me read in areas of the library that normally the children didn't go into. Then in high school I worked in the library. The librarian there was Mrs. Cecil Kessler, better known to everyone as 'Aunt Cecil' . . . [She] was like a second mother to me . . . and an important influence in my decision to go into librarianship." Fred continued working in the library while an English major at the University of North Carolina at Chapel Hill, and staff there convinced him to pursue a Masters in Library Science rather and a Masters in Business Administration.

Fred received a Masters of Science in Library Science from the University of North Carolina in 1962 and was selected for an internship in medical librarianship at the University of California at Los Angeles under Louise Darling. He recalls he and the other two interns "bonded very, very quickly and sort of became the three musketeers--the whole staff was warm and nurturing...[and the] coordinator of the program was sort of like a den mother to us." It was during this time that Fred developed a strong interest in reference work, and he went on to co-author with Jo Anne Boorkman the standard text on medical library information resources, Introduction to Reference Sources in the Health Sciences, now in its third edition.

The internship led to his first job - that of Biomedical Machine Methods Librarian at UCLA. In this beginning stage of library automation Fred was involved in the computerization of serials records. "We wanted to have an automated kardex, as it were, and be able to check in and claim and do all of those different serials functions automatically . . . It was the basis for what ultimately became the serials system within the library, although it was so far removed from what they're doing now that you wouldn't know it." Fred held this position for three years and then worked for a short time in the Institute for Library Research before returning to the University of North Carolina as Visiting Lecturer while working on a Ph.D. in Library Science from Indiana University in 1971. He taught for fifteen years at the University of North Carolina as associate professor and associate dean. In 1986 he was appointed to Dean and Professor of the University of South Carolina College of Library and Information Science. As Dean, he initiated programs in distance education and comprehensive continuing education, successfully integrated computer technology into the curriculum, and worked with the community and the university to establish the Internet-based Community Information Network.

At the time of his interview, Dr. Roper had just turned 60 and, when asked about his plans for retirement, stated, "While I begin to think about retirement, as long as the President, the Provost, [and the] faculty want me to continue . . . I will continue to work. Among other things, I plan to be looking for new venues for our distance education program and new ways of delivering CE courses."

Summing up, Fred indicates he feels a lot of progress has been made by medical librarians in terms of adapting information technology to information needs. He also feels our biggest challenge now will be to adapt the Internet to our needs and to develop quality control for materials that go on the Internet. He comments that, " I'm certainly proud of the publication that JoAnne [Boorkman] and I did, Introduction to Reference Sources in the Health Sciences. Also, Platform for Change was something that I think has had and continues to have an effect within the Association . . . I think, though, the thing that is most important to me has been watching my students progress and do good things." Fred was particularly pleased when two of his former students were named Fellows of the Association, and says, "It's their accomplishments and their contributions to the field that are the most important."