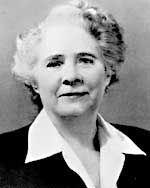 Margueriete Prime summed up her accomplishments at the American College of Surgeons very neatly at the end of her interview. "...the most important service my department and I, in its connection as its director did, was the package library service sent to various physicians and surgeons during the period of the war. Translations and bibliographies were important, too. And unusual, because there were not many translation services at that time. But the package library service reached the men who had no material at their various camps and headquarters, and it was, I think, a very important service, in that way. The most important publication which, for which I was responsible, was undoubtedly the catalog of the Orr collection. And then I think my most important contribution to the Medical Library Association was the development and encouragement of regional groups."

Margueriete was born on a "tree claim" in Nebraska and had the certificate to prove it. After graduation from the University of Chicago, she taught for several years but became discouraged by the discipline problems in the classroom. After completing business course, she was hired as a secretary at the American College of Surgeons in 1921 for the Library and the Department of Literary Research. The library consisted of reprints, books, journals, and rare books arranged by the Cunningham Classification. In 1932, Margueriete was put in charge of the staff of nine. The library and its services were not limited to the Fellows of the College and most of the traffic was through correspondence. A package library service was offered which consisted of loans of reprints and clippings on particular subjects. During the war, these packages were considered "permanent" and were not expected to be returned. They were a source of valuable information for physicians in the war effort who often were literally operating outside their specialty. Margueriete promoted her library and its services at exhibit booths at the annual congresses and in regular articles in the Bulletin of the American College of Surgeons.

When asked about training for medical librarians, she advocated language expertise for its utility in translating and cataloging. Her views on this appeared as "Language in Library Science," co-authored with Eileen Cunningham, in a 1958 issue of Modern Language Journal.

After serving as President of the Medical Library Association in 1951-52, Margueriete received an honorary appointment as Vice President of the International Congress on Medical Librarianship held in London and which attracted approximately 100 attendees. "It also resulted in my getting a very nice check from my organization to cover my expenses. My salary at that time wasn't huge, and my mother was hospitalized at the time, and I couldn't possible have gone over without that very generous check...Wilma Troxel, Bertha Hallam, and I made the most of the time we were over there. Wilma and I tried very hard to get an inexpensive trip by ship, but we could get nothing but first class at the time, and Bertha flew. But coming back, we all flew. However, we took a trip up the cathedral side of Great Britain to Scotland, to Edinburgh, and down the college side. And then afterwards, we took the little grand tour of Europe, for which we were very grateful."