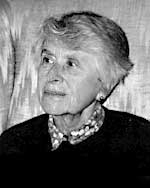 Ursula Poland was the librarian at the Albany Medical College Library for many years. She was active in international librarianship, worked politically in the interest of medical libraries, and presented the 1982 Janet Doe lecture. She says, “my philosophy [is] to try to break down barriers regionally, nationally, and internationally.

Ursula worked at the Albany Medical College Library while she was in library school and on graduating became the director of the library. There “was a beautiful ring binder which said Library Procedures, and I opened it and it was full of emptiness - there was not a single page.” The library had been in existence since 1839 but “when I first came there, the library was very much on the sidelines...I think we've managed to change that...it is right for the Library to be considered as important a department as biochemistry.” She credits the Medical Library Assistance Act with enabling the school to extend library services and to open a new library building in 1972.

In keeping with her philosophy of breaking down barriers, she says, “ I wish people would think of themselves less as a medical school librarian...or a hospital librarian and ...more of themselves as just a medical librarian...where there is a commonality that brings us together and does not put us into pigeon holes.”