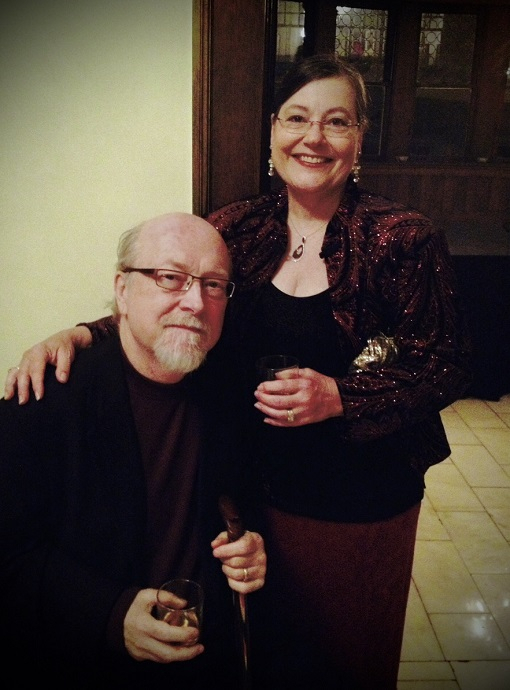 From the perspective of different arenas of librarianship, Lynn M. Fortney, FMLA, and T. Scott Plutchak, AHIP, FMLA, shared interests in issues of scholarly communication and communicating with international audiences of librarians and publishers.

One of the things that has been so interesting and rewarding, I think, for both of us is the way that we’ve been able to share the personal and the professional while having these different roles. Because of what we share—just absolutely understanding the issues and the struggles that the other person is going through, but having different sets of expertise—we were constantly learning from each other, because each of us had these different, deep wellsprings of knowledge and experience.

Fortney worked in commerce at EBSCO Information Services, while maintaining her core identity as a medical librarian. Her Index Medicus Price Study was recognized as a valuable resource for multiple audiences. Plutchak directed the Lister Hill Library of the Health Sciences at the University of Alabama at Birmingham (UAB). He was both an editor himself of the Journal of the Medical Library Association and a leading voice in open access issues—a moderating opinion advocating for cooperation with publishers. Plutchak and Fortney also collaborated on a very different venture: the band called Bearded Pigs, a feature of library conferences and a means for informal networking.

That was the other thing about the Bearded Pigs: There were three to four American librarians, a British librarian, a vendor, and a publisher.  So, it was kind of a little representative group.

Fortney graduated from library school at Emory and entered medical librarianship at the new branch campus of the University of Alabama medical school, the College of Community Health Sciences in Tuscaloosa, where she became director and oversaw a new library building. She was a founding member of the Alabama Health Libraries Association, which recognized her contributions to the state’s profession many years later with the Lynn Fortney Librarian Award. Fortney moved to the Lister Hill Library where she became acting director before leaving to join EBSCO. There she shaped a new position, expanding greatly the company’s revenue from health sciences libraries and finding opportunities to work with librarians.

Plutchak attended an innovative library school at the University of Wisconsin Oshkosh and was surprised by an interview and offer from the National Library of Medicine Associate Program. His experience at NLM and his exposure to people such as Bob Braude during a practicum at the University of Nebraska were formative,

It was a perfect, perfect match. And I didn’t know when I left for that week what I wanted to do after NLM, but I knew at the end of that week that I wanted to work in academic medical libraries.

and he repaid their commitment to him during the rest of his professional career.

These are all opportunities that I saw to give back and to pay back that investment that NLM had made in this kid coming out of this unaccredited program in Oshkosh, Wisconsin.

He moved to St. Louis University, where he worked for another significant figure in his career, Judy Messerle, later succeeding her as director. At a turning point in his career, Plutchak and Fortney met, subsequently marrying at a Midcontinental Chapter meeting,

[T]his is the way to do a wedding. Get the reception started before the ceremony… Midcontinental is a small chapter. There were probably eighty-five, ninety people there. At least two or three hundred librarians claim to have been there.

and Plutchak moved to Birmingham. As Lister Hill director, he built a team of senior staff whom he gave the freedom to operate, and he made connections that facilitated incubation of university technology. His final position examined digital data management at UAB.

None of the successes that we had, of which there were many, were things that I did. The bit that I did was essential, because it was helping to create the environment that enabled these smart and creative people to go out and be smart and be creative and be innovative and be supported…

I think that is something that directors have the opportunity to do. I think too few take advantage of that, because maybe they just don’t think about it that way, but to be able to create a space where people feel safe and they can take risks and they can learn how to do that—they can fall but they know that there’s somebody there who’s going to pick them up and who is going to back them up.

Both Fortney and Plutchak were elected to the Medical Library Association Board of Directors. He achieved his two key goals in MLA: to edit the Bulletin (later Journal), which he did for six years, leading its move to open access publication on PubMed Central, and to deliver the Janet Doe Lecture in 2011. After serving on the first New England Journal of Medicine Library Advisory Board, Plutchak encouraged the Association of Academic Health Sciences Libraries to establish the Chicago Collaborative, with representatives from publisher organizations and AAHSL working together. He followed this with his most significant effort with the Scholarly Publishing Roundtable, which led to federal guidance on making research and data publicly accessible.

[T]he way all of that is shaped, is a direct result of the Scholarly Publishing Roundtable and the work that the fourteen of us were able to do in bringing these people with such different perspectives and forcing us to get together, work in a room, and work through these issues, and found out that in the end, we agreed on a lot more than we disagreed.