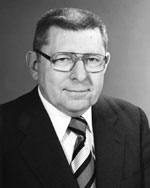 His employment record was varied and spread over a wide geographic area. From 1944-47 he was employed by various hospitals in Madison, Wisconsin, and Chicago. He was the Science instructor at the Englewood Hospital School of Nursing in Chicago in 1947-48. In 1949 he worked with the American Friends Service Committee to provide emergency relief to Palestinian refugees in Gaza as an Environmental Sanitation Officer. From 1950-52 he was employed by the United Nations Relief and Works Agency for Palestine Refugees in Beirut, Lebanon, as a Works Officer, then he joined the American University of Beirut’s School of Agriculture as Director of the University Farm (1952-54.)

His approach to librarianship hinged on the idea that there should be no small libraries; the entire scholarly record should be available to all. Interlibrary cooperation occupied much of his time. He reorganized the Detroit Medical Library Group which produced the Selected List of Biomedical Serials using electronic data processing equipment in 1963. He helped establish the network of medical resource libraries of Kentucky, Ohio, and Michigan under the National Library of Medicine Regional Medical Library Program. He also helped organize and operate the Michigan Library Consortium to bring the services of OCLC to Michigan libraries. He founded the Southeast Michigan League of Libraries in 1978 to insure access to library services for all students and faculty in the area.