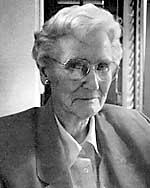 Jean Antes was an early leader in circuit-rider library service to rural areas. She also emphasized the importance of building relationships between physicians and librarians and initiated clinical reference services and literature reviews by the library. She says "...the value of scanning [journals] was to see if there was anything there that doctors had talked to us about, " and notes: " I would meet doctors in the halls and they would say, Oh, I wanted to ask you something, would you get such and such?"

Jean's first career was in Human Resources. She worked with the YWCA, and after earning a master's degree in Student Personnel, was the Assistant Dean of LaCrosse College in Wisconsin, and then Dean of Women at Midland Lutheran College in Fremont, Nebraska. She says that her faith guided her to a career in librarianship: "Chance, if one wants to call it that, took over, and after a conversation about research and library work, I remembered that one of our neighbors in Williamsport had become a medical librarian Now that was something I thought I would really like."

After library school at Case Western Reserve University, Jean became the librarian at Robert Packer Hospital/Guthrie Clinic in Sayre, Pennsylvania - where she worked until she retired in 1983. In this position, she converted the catalog from Dewey Decimal system to National Library of Medicine, created circuit rider library access for rural physicians, and worked on delivery of information throughout the hospital. Her circuit riders were in Pennsylvania and New York but people in other states called to consult with her on setting up circuit programs. After retirement from the library, Jean took on the role of editor of The Guthrie Journal.

Jean's service to MLA includes extensive teaching of continuing education courses on budgeting. She also served on the Recertification, Awards, and Continuing Education Committees and on the 1987 National Program Committee. Jean was elected a MLA Fellow in 1986. She was also active in the Upstate New York and Ontario Chapter.

Jean notes, "Medical librarians get information for people who really need it to take care of someone...so they recognize that they have a special responsibility to be helpful, to get the absolute latest and best information."