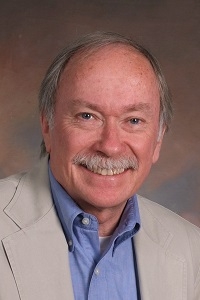 Wayne J. Peay, FMLA, is known throughout the health sciences information profession as an innovator and change agent, particularly in the early adoption and use of technology.

It began totally by accident… I had the opportunity, and I don’t know that many people have careers during a time when their professions are being transformed… But computing began to really appear, be accessible, become useful, be applied. I was in the midst of places where that happened… One of the benefits of being…in the profession, and I think most certainly one of the responsibilities, is that you as a librarian must continually redefine yourself and build your skill set. I learned about technology by doing it, talking to people, reading, working on it always throughout my career. It was very clear to me very early on that technology would be transformative for libraries.

During his career, he helped develop landmark information management systems and introduced videoconferencing and Internet communication tools long before they became widely used. In his home state of Utah, he worked with the state legislature to fund technology and library services and led planning for the governor’s office for the general technology infrastructure of the entire state. Recognizing that, as a small state, Utah would always face resource restrictions, he aggressively pursued collaboration on multiple levels and built service platforms to link communities together.

We began building coalitions and partnerships and collegial approaches to library services across the state... We started introducing the idea of investing in technology in libraries. This percolated around and the funding proposal was not from a single institution—it was championed by the Board of Regents…and they shepherded it through the legislature. That gave me my first opportunity to go to the legislature and to present before the appropriations committee and talk about technology… [T]hese guys were farmers, some of them were ranchers, some of them were out of little businesses around town—they were part-time legislators. We had to become very basic in our explanation of what we were trying to do with technology. We were dealing with very early technologies. What they got and what they liked and what got us money is that we were working together as a consortium, as a community. Where you invest in the community, everybody gets a benefit.

Peay received his bachelor of arts degree in history from the University of Utah in 1973 and a master of science degree with honors from the School of Library Service of Columbia University in 1977. Prior to and while attending library school, he worked on an early library automation project, the PHILSOM serials control system, at Washington University and the Medical Library Center of New York.

Dr. [Estelle] Brodman [at Washington University] was notorious in the profession as a driven woman… She was truly genius-level talent. She held herself to very high standards and she held everybody else in the world to high standards. Working for her was exciting and difficult. She would wear people out, because that’s the way she worked. But it was fun… There was a high degree of responsibility, but it was fascinating because she treated her library as a laboratory, and that was a model that was very influential for me as my career developed and really one that I tried to imitate over time.

He served as head of several departments at the Spencer S. Eccles Health Sciences Library at the University of Utah, including Media, Technical, and Computer Services. In 1984, he was named director of the library, a position he held for twenty-three years. He received numerous federal and state grants and contracts. Projects included the first computer network in the state connecting colleges and universities as well as public libraries, the installation of a telefacsimile network linking higher education libraries, implementation of integrated library systems, and the development of Pioneer: Utah’s Online Library.

We leveraged a piece of [the library appropriation] to build something that, for me, was one of the accomplishments that I take great pride in, and that’s what turned out to be called “Pioneer,” which was basically purchasing services from an aggregator…for electronic journals and a few monographs that are available to every college, every public school, and every public library in the state. That was big. It still is big. Every school has at least some electronic resources. Many of the little public schools have no libraries, but they at least have Pioneer.

He served as president of the Association of Academic Health Sciences Libraries, member of the Board of Directors of the Medical Library Association, and chair of the National Library of Medicine’s Biomedical Library Review Committee. As co-chair of the AAHSL Future Leadership Task Force, he was instrumental in launching the highly successful program to train future library directors. He presented the Janet Doe Lecture at MLA’s centennial meeting in 1998, “Strategies and Measures for Our Next Century.”

I was trying to convey that we had gone through a hundred years and we were entering this new age of exploration and that we should seize the opportunities, but more importantly, the idea of making sure that we have ways of determining whether we succeed or not. That’s the measuring part… Everybody likes librarians, and it’s a wonderful thing that they do, but it’s really important to be able to show them why they should like us and appreciate the work we do and understand that it’s important.

Always bold in searching for ways to improve services and operations, Peay envisioned a new model for delivering Regional Medical Library services across a widely scattered geographic region. This model was approved for implementation, and, in 2001, he became director of the MidContinental Region of the National Network of Libraries of Medicine.

[W]e had a technology vision for how an RML could operate that was very different… We put together a proposal that was basically to decentralize the operation significantly, where you put RML staff out in the resource libraries, pay for them, have them work on RML activities in their respective states or on specific areas of responsibility, and manage that using the Internet… We were talking about things that were just beginning to emerge, like videoconferencing and having people have easy communication at their desktop across the Internet.

From 2002 through 2005, he co-directed the construction of the Spencer F. and Cleone P. Eccles Health Sciences Education Building, then oversaw its initial operation as an interdisciplinary environment applying technologies in instruction.

We walked into one of these deans’ meetings…and I said, “I’ve been giving some thought to how this new facility, as an interdisciplinary facility, can be managed effectively. It occurs to me that really the library is in the best position to manage the facility on an equitable basis and give us the kind of interdisciplinary environment that is needed. We offer that in the library, and we can extend that into this new building.” There was this huge pause at the table, but you could see the wheels turning as each dean thought about having one of the other deans in charge of the building. They looked at me and said, “This is a great idea!” …I think the goals of interdisciplinary education are still out there to be realized, but we made progress, and the building made it possible. The library secured its position. Nobody will take over the library now.