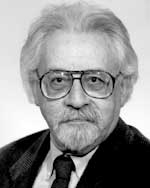 Gerald J. Oppenheimer was Assistant Director of Libraries at the University of Washington, chairing the Committee on the Status of Librarians and working with Budget, Serials, and Collection Development Committees and with the Management Review and Analysis Program. He was very active in MLA and served on the Board and Executive Committee from 1974 to 1977. He was the founding president of the Association of Academic Health Sciences Library Directors (AAHSLD) and had a long involvement with the National Library of Medicine. Born in Frankfurt am Main, Germany, Oppenheimer was 11 years old when Hitler came to power. At the age of 16, he "was required to act independently and to make decisions. That, I think, set the one for building some self-confidence." He says of his background, "I think it has something to do with how I turned out eventually."

His first job out of library school was at Seattle Public Library where he says he learned from "the head of the department, Edith Fry to deal with the foibles of the staff." His next position was at the Fisheries/Oceanography Library at the University of Washington where he organized the huge collection of reprints and report literature. In 1960 he took over the library of the Boeing Scientific Research Laboratories (BSRL). The experience was valuable and he learned about "getting results while working with many levels of bureaucracy."

From 1963 until his retirement at the end of 1987 Gerry was Director of the Health Sciences Library at the University of Washington. He explains that his aim was to lessen the involvement and dependence of the Health Sciences Library on the parent structure, the University Library system. However, he says, "my edge was really the creation of the Regional Medical Library (RML) which made this library unique and different from other parts of the library system." The RML grant, the second in the country, was given in 1968. Being an RML director, Oppenheimer worked with NLM on a continuous basis. He says, "I never felt threatened by the big, bad east as some people did." In 1974 Oppenheimer started a clinical librarianship program, the second university in the country to do so.

His first MLA meeting was in 1963 in Washington, DC, and he describes "a kind of collegial spirit and a warmth that really brought me in." Two years later he was appointed to the Nominating Committee and at the 1970 meeting he witnessed what he called a "defining moment" when the members sustained a motion for MLA to petition Congress to re-order its priorities away from war and towards health. Soon thereafter Oppenheimer was involved in an effort to change the formal structure of MLA. After being on a number of MLA committees his greatest pleasure was when he presented the Marcia C. Noyes Award to an unsuspecting Louise Darling. He also particularly remembers his work on the Legislative Committee and his work as the official representative to the Canadian Health Libraries Association.

Quoting George Washington Plunkitt, a Tammany Hall boss, Oppenheimer finishes his interview with "Anyway, that's about all the advice I can give you: 'See your opportunities and take 'em.'"