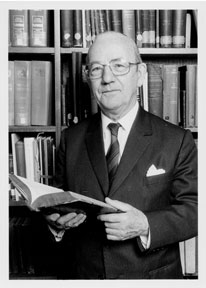 Leslie Thomas Morton is the author of the definitive bibliography of medical history popularly known as: Garrison and Morton’s Medical Bibliography. He was a co-founder (in 1947) of what became the Health Libraries Group (the medical library association of the U.K.), and an organizer of the first International Congress on Medical Librarianship in London in 1953. He was the first non-U.S. recipient of MLA’s Marcia C. Noyes Award, a recipient of the Cyril Barnard Memorial Prize in the U.K., and of a Royal Charter Centenary Medal on the occasion of the celebration of the 100 th anniversary of the granting of a charter to the Library Association. He is the author of numerous multi-edition texts on medical libraries and librarianship and of articles on medical historical bibliography. While he lived throughout his life in Great Britain, he had many strong connections with MLA and with librarians throughout North America and is warmly remembered by librarians on both sides of the Atlantic as a scholar and a friend.

Morton was born in London, England, on 20 July 1907. He was one of three children born to what he called: “ordinary working class people”. He married in 1933 and had two children. He and his wife – Bertha – celebrated their Diamond wedding anniversary in 1993. Mrs. Morton was his helper throughout the whole of his bibliographical career and he was greatly saddened by her death in 1997. Leslie Morton died in 2004.

Entering librarianship directly out of high school in 1923, as was the practice in the U.K., he served an apprenticeship in the Medical Sciences Library of University College, London. Morton became an Associate of the Library Association (ALA) in 1932, and a Fellow (FLA) in 1964. Throughout his career, he held positions as a librarian at the Royal Society of Medicine, St. Thomas’s Hospital Medical School, the British Council Medical Department, the BMJ Information Office, the National Institute for Medical Research, and the British Postgraduate Medical Federation.

Early in his career, Morton began work to augment and annotate a U.S. publication on medical historical bibliography with which he had become familiar. Fielding H. Garrison’s: Texts Illustrating the History of Medicine in the Library of the Surgeon General’s Office (1912, revised 1933) was the basis from which Morton began. He never met Garrison (who died in 1935), but by the time he published the first edition of his bibliography in 1943, he had greatly enlarged upon and enhanced his predecessor’s work. Under a number of slightly varying titles, the work has seen four subsequent editions, the last of which came out of San Francisco, under the editorial control of Jeremy Norman in 1991.

Leslie Morton visited the U.S. on a number of occasions as a lecturer, an attendee of MLA meetings and as the recipient of awards. He made friendships with many of MLA’s well-known characters: Frank Bradway Rogers, Gertrude Annan, Estelle Brodman, Mildred Langner and many others. His activities in the profession in his native England similarly brought him into contact with many of those who are today regarded as “the big names” in British medical library history.

He is remembered today for his diligent scholarship in medical historical bibliography, and his work in helping to bring medical librarians together into a professional association in the United Kingdom. His quiet manner and diligently academic approach to his chosen profession helped to advance medical library scholarship in Great Britain.