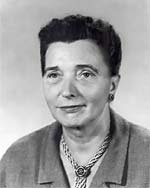 Lois Miller claimed her "...background in indexing and cataloging and classification has followed me all the days of my life." Her professional life included a twenty-two year association as the first librarian for the American Journal of Nursing Company.

Lois earned an undergraduate degree in library science at the University of Wisconsin and immediately landed a cataloging job at the East Chicago (Indiana) Public Library. In 1931, she joined the staff of the John Crerar Library, which had a medical collection, as a classifier. Lois was recommended for a cataloging job at the National Archives and was encouraged to move to Washington in 1937. "...the head cataloger at the John Crerar Library thought I'd been there long enough. Now this was the cataloger telling me I'd been there long enough. 'Cause she thought that a young person should go out and see the world." After the war, Lois free lanced in New York City with small special libraries and indexed two editions of the World Almanac. Her free-lance assignment with the American Journal of Nursing Company turned into a permanent position in 1949 and she would stay there until her retirement in 1971. Coming in at ground level with the American Journal of Nursing Company Library, Lois was well acquainted with the development of nursing libraries which paralleled the growth of graduate nursing education. "I think--this is my feeling about nursing libraries...they, and hospital libraries, came into their own after accreditation...I've always felt [that] was a beginning of the improvement in the libraries and a more national interest among their librarians in what was going on."

Lois served on the Exchange Committee of the Medical Library Association and was proud to serve on its Board of Directors. She recalled the vitality of the New York Regional Group, whose meeting attendance exceeded that of the annual meeting.

Lois' affiliation with the American Journal of Nursing Company continued in retirement as the organizer of its historical files. She also returned to free-lancing, most notably as the indexer for Public Health Nursing, which necessitated travel around the country to consult the back issues.