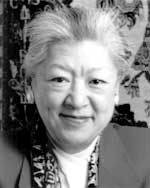 Nina Matheson was interviewed at mid-career, after the publication of the Association of American Medical Colleges “Matheson Report” on the future roles for health sciences libraries and librarians and her advocacy of the role for librarians in medical informatics. Nina was Director of George Washington University Himmelfarb Health Sciences Library from 1974 to 1980, and of the Welch Medical Library at Johns Hopkins University beginning in 1984. She served on the Medical Library Association Board, was president of the Medical Library Association in 1983, and elected a Fellow of the American College of Medical Informatics in 1986. An English major in college, she says “if I've been successful as a medical librarian, it's not been because of any subject matter...[what is] really important [is]...native intellectual curiosity and a critical and analytic cast of mind that is keyed toward trying to find solutions.”

Nina began working in libraries in college “mainly to get access” to the closed stacks. After graduating with a Masters in Librarianship from the University of Washington in 1958, she worked briefly as an intern at the New York Public Library and then moved to the National Library of Medicine as a selection officer, the first of her frequent moves dictated by her husband's career. In 1961 she worked as a Chinese cataloger at the University of Indiana and says this work “probably really sums up most of my life...[I] didn't know very much Chinese, but [I] figured out how to do the job anyway...I tend to make a little bit go a long way.” In 1962 she began a nine-year tenure at the Missouri Institute of Psychiatry where she computerized the catalog, moved the library to a modern facility, and began an ambitious Selective Dissemination of Information program to psychiatrists in the state with funds from an early National Library of Medicine Resource Grant. She also had the good fortune to come under the mentorship of Estelle Brodman and comments that “I learned more from Estelle in those years than I could have any other way [and] ...I bear my Brodman scars with a certain pleasure, in retrospect.”

In 1971 she moved back to the National Library of Medicine in the Extramural Program and then as chief of Programs and Evaluations, where she started a computerized grants tracking program that she describes as “the story of my life--I've got a lot of things started.” From 1974-1980 she was Director at the Himmelfarb Health Sciences Library at George Washington University and felt unable to move forward in a way she wished, so that “at the time I left, we were just getting electric typewriters...we just didn't have the kind of environment that was suitable for any kind of serious research.”

Nina felt that it was important for librarians “to be able to [have an] effect on medical education” and in 1977 helped establish the Association of Academic Health Sciences Library Directors expressly “to give us a presence in the [Association of American Medical Colleges]...to have representation on the Council of Academic Societies.” In 1980 she was asked to be the principal investigator on the Association of American Medical Colleges project to study roles for health sciences libraries. The “Matheson-Cooper Report” had a profound effect on how librarians approach their profession. Nina describes this change as “the dimension of librarianship up to now has been basically service...[but] in the service dimension there is no real future...what's needed is not facilitators...[but] tool builders and...system developers...and solving information problems...[to] go beyond presentation and get involved in the application of that information that we're trying to say we manage.” She adds that this “isn't anything...we learn in library school.”

At Welch Medical Library Nina has been able to put her ideas into action because it is “an unusual place...the role of this administration is to ...help get the resources [you need] and to trust you to use the resources...it gives you the opportunity to both make mistakes and to make good [but]...handles mistakes in a compassionate fashion...if you're brave enough to take the risks, the consequences will be valued.” Her work with the On-line Mendelian Inheritance in Man involves “analyzing and interpreting query data and then translating that into systems changes.”

Nina says librarians must “keep the way clear to determine our own lives and our profession.”