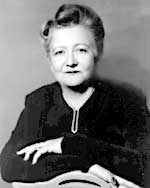 Mary Louise Marshall, the Noyes Award winner in 1953, devoted thirty-nine years to the Orleans Parish Medical Society and Tulane University Medical School Library and diligently served the Medical Library Association in various capacities as a committee member and officer. In addition, she was on the Survey Committee of the Army Medical Library and developed the preliminary edition of the Army Medical Library Classification, the forerunner of the National Library of Medicine classification. Mary Louise was subsequently named to the first Board of Regents for the National Library of Medicine. She wrote The Physician's Own Library, co-authored the chapter on classification in the first Handbook of Medical Library Practice, a best seller for the American Library Association, and co-edited the second edition with Janet Doe. Mary Louise was an attendee at the early International Congresses on Medical Librarianship and a consultant with medical school libraries in Columbia, South America - something she undertook within three days of her retirement in 1959. Her most significant contribution, however, may very well be in the area of education for medical librarians.

Mary Louise's choice of librarianship as a career in the pre-World War I era was one of the few options open to women. She attended a non-degree granting library school program at the University of Wisconsin. Entrance to the program was based on a competitive exam and she recalled only 35 of the 85 test-takers were admitted. In talking about the curriculum at Wisconsin, Mary Louise paid tribute to the teachers. "But the most important part of the thing was a faculty which inspired students to the mission of the book. You felt that you were especially endowed. I don't mean by education. It was a vocation. By the time you left there, you had a spirit of going forward and what you could do with books whenever you had a chance."

Like many of her generation, Mary Louise worked for a society library, Orleans Parish Medical Society in New Orleans. She eventually had the uneasy task of combining that library with the medical school library at Tulane. The two libraries began sharing the same building in 1931, but their collections could not share the same shelves. A full merger would take years to realize by which time the society library had dwindled and the medical school library had greatly expanded. She attributed the demise of the society libraries not only to economics but to the increasing specialization in medicine which transferred the allegiance of physicians from their regional society to a specialty association.

Mary Louise served an unprecedented five-year term as President of the Medical Library Association from 1941-46. There could be no meetings during this period and it was difficult to maintain member interest and to conduct business solely by correspondence. Mary Louise constantly worried about the financial problems and future of the association. It was in her Presidential Address in 1946, when a meeting could finally be held, that she reported on her innovative internship program designed to give generalists a grounding in medical librarianship through practice and personal conferences. "The whole idea was based on my own experience. At the time I accepted the position as medical librarian, I had told the doctor who interviewed me that I knew nothing about medicine, but that I was interested in organization...The only advantage I had was that I had had five years of Latin when I came to them." Since she raised the discussion, Mary Louise found herself on committees within the association studying education issues and later standards and certification. It is fitting that the first of the framed, handlettered, parchment certificates was awarded to her when the certification program was finally implemented.