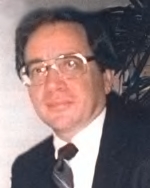 John LoSasso directed the Medical Library Association for five years, from 1973 to 1978. He was the second person to hold the office of Executive Secretary after Helen Brown Schmidt, who held the job for twelve years. Two years into John's term, the title was changed to Executive Director, to better describe his relationship and responsibilities as manager of the Association's full time staff, and administrator of its programs.

John's educational background included a liberal arts degree and a masters degree in experimental psychology from Purdue University, with minors in pharmacology, physiology, and statistics. Around 1965, he entered the association management field. John's managerial experience before joining MLA was with American Association of Dental Schools, the American Dental Hygienists' Association, and the American Society for Preventive Dentistry.

From the outset of his management career, John was adept and interested in situations where there were unusual growth opportunities, and he presented himself to the MLA Board that way. He was hired during a transitory period from volunteer leadership to a strong central office. "As I recall," he said, "one of the major interests I shared with the Board... was to not take the organization away from the members, but to take advantage of a professional staff where professional association services were needed, and to involve members in things more directly relevant to their interests." John explained that, "If [he] had any success with MLA, it was coming in at a time when the organization was in a position... to make some difficult changes in its structure, in its whole way of doing things [and] we were able to change an awful lot of thinking in the organization."

The structure and management of MLA changed under John. The Board agreed to establish an Executive Committee to arrive at decisions between its semi-annual meetings. The Board was large, had members scattered across the country, and needed to do preparatory work to arrive at meetings with an Executive Committee position. John managed to establish computer based membership records, provide support services for the committees of MLA, and invest the Association's assets to protect them during the period of inflation the country was then experiencing. John examined profitable programs that could be developed into income generating activities, and clarified, "Not for profit does not mean not for income."

John kept a conservative stance on the Association's purpose "to advance the art and science of medical librarianship." He wanted the group to stay away from taking positions on timely issues such as the Vietnam War and affirmative action. On an occasion when he found himself at odds with the Board, he commented, "One thing I learned about librarians, is that they have a very high level of motivation and sensitivity towards social issues. They're not a quiet group on things like that...and have some very strong feelings as a group."

John said the MLA directorship lived up to his expectations, [in] "getting to know the committees, researching what they had done, beginning to work out a new kind of relationship among the staff, and the committees and the Board of Directors." He was proud of MLA's progress in the area of continuing education, and well satisfied by positive comments about annual meetings during his directorship. His greatest satisfaction was experiencing "... people responding to an organization and we had something to do with what that organization was doing. So program areas, meetings, educational conferences, they're really kind of related. Those were the things...those were the areas which I think I had the most satisfaction."

John passed the directorship to Shirley Echelman, who became Executive Director after he left in 1978.