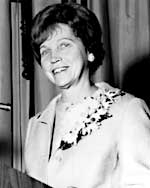 Mildred Crowe Langner was president of the Medical Library Association in 1966-67, editor of the Bulletin of the Medical Library Association, and recipient of the Marcia C. Noyes Award in 1976. Her philosophy was to “involve the whole community in the library” and that “we are a profession of service, service, service.” She was instrumental in starting medical libraries at the University of Alabama and Miami. Mildred says “the thing I really liked best is being a pioneer and going in and starting something from scratch.”

Mildred began her library career at the Chattanooga Public Library in the late 1930's as the head of the Medical Society Section where she learned to appreciate the history of medicine: “I'm one of the select society of people who've read every word of [Cushing's Biography of Osler] even to every word in the footnotes and bibliography.” After interning at Vanderbilt under Eileen Cunningham, whom she describes as “a genius in my opinion ...and geniuses probably are difficult,” Mildred went to the University of Alabama to start a new medical and dental library. At Alabama she also taught scientific writing to house staff, (the beginning of a long career in library education,) and began her publishing career with Introduction to the preparation and writing of articles for medical journals in the Jefferson-Hellman Hospital Bulletin in 1950. She also obtained the Lawrence Reynolds Collection - “at that time this was the premiere private collection.”

In 1955 she left Alabama to start a medical library at the University of Miami. She received grants from the Department of Health Education and Welfare and private financing to build a new library that was completed in 1972. The Calder Library also served as an art gallery, reflecting Mildred's belief that libraries must be part of the whole community and that beauty must accompany function. Except for two years at the National Library of Medicine as head of Reference, Mildred remained at Miami until retiring in 1978.

Although acknowledging the importance of technology, Mildred worries that librarians now “don't become as really involved in a research project...they don't have to study...all they have to do is to study how to retrieve....I don't think [technology] is helping their knowledge at all...they're going to be much more efficient about a lot of things but less learned.” Researchers she fears “will be referring to the library for help not referring to the library for knowledge.”