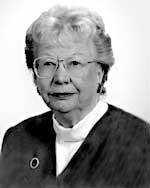 Gertrude Lamb was still actively working when interviewed for the Oral History Program. And yet, even then, she was already renowned for her development of clinical librarianship and had served as president of the Medical Library Association. Three years after the interview, she would be recognized with the Noyes Award.

With a bachelor's degree in economics from Radcliffe College in 1940 and a master's degree in public administration from Boston University in 1945, Trudy enjoyed several years teaching courses in government and international relations at the University of Connecticut. She resigned her teaching position in 1952 and worked in the university library, which benefited from her supervisory and budgetary expertise. In 1966, she returned to graduate school at Case Western Reserve for her master's degree in library science and, with support from a fellowship, she continued in the doctoral program. Trudy's thesis for her Ph.D. in information science with a minor in public management science was entitled, The Coincidence of Quality and Quantity in the Literature of Mathematics.

Although she expected to go to an academic library, Trudy was attracted to the educational and computer components of the position at the University of Missouri-Kansas City School of Medicine. It was in her first year there that she hit upon clinical librarianship as a way to respond to stated and unstated information needs in the teaching hospital environment. Within two years, Trudy accepted a position in Connecticut. "And when I came to Hartford, it was largely sponsored by Jim Morgan, who was then Director of Libraries at...the U Conn Health Center...he was much interested in clinical librarianship. At the same time, Jackie Bastille was leaving the position of Director of Libraries at Hartford Hospital...the two institutions got together and U Conn didn't have a lot of money to spend for a librarian to run the clinical library program, and Hartford Hospital didn't have a lot of money to spend for a director of libraries, and so what they did was to put together a joint appointment." The cooperative arrangement lasted until 1980 when Trudy went full-time with the hospital.

Trudy described clinical librarianship as a natural response to a new teaching program at Kansas City. "...They had what was called a docent system, in which a physician was assigned twelve students and he saw those twelve students through their career in medical school. And much of the teaching that was done was by the docent to the medical student in the patient-care setting. They did it on rounds...And much of this was a kind of tutorial between the docent and the students, and so very different, and it was very information dependent because it was assumed that the student would do a good deal of studying on his own...And I just started out saying well now if I'm going to support that kind of educational activity, I'd better find out what it's like. And I went out as a member of the patient care team...And I discovered that all of those team members had information needs and they were never met." She defined clinical librarianship as "...an information system in which information is brought to the point where it's most needed for decision-making, and is done most effectively by a medical librarian, rather than some other team member, because that medical librarian has two unique skills that I think are unique to librarianship, one of which is the librarian knows how to ask a question, and then knows how to access the literature quickly." What makes for a good clinical librarian? Trudy summed it up in one word, personality. "...they have to be bright, and they have to be curious. And they have to have a kind of professional stance...a very strong service orientation and then a pretty sturdy ego, because there's an awful lot of what I began to call 'brutal friendliness' out on the patient floor."

From her own experiences with clinical librarianship, Trudy made the distinction between the teaching role of the librarian in an academic setting for scholars needing exhaustive searches and the information filtering role in the hospital setting for clinicians needing an answer to a specific question. She evaluated her programs using the critical incident method and explored other quantitative methods of evaluation. She left it to others to continue that line of research and suggested the potential of outcome measures and value improvement studies. Within the Medical Library Association, Trudy did her share of committee work. Her presidency, in which she focused on certification and budget, was unique in that she had only been a member for six years. She contributed a chapter about administration to Hospital Library Management, published in 1983.

In closing, Trudy took one measure of her success in the reputation of her library not only among its users but in the value placed on it by administrators through budgetary support and her inclusion on institution-wide committees. The other measure she pointed to was the achievements of those she mentored. She was optimistic about the future for scholar-librarians willing to meet new challenges with confidence, long-range perspective, and analytical skills.

Three sections of the 1985 interview of Gertrude Lamb were sealed in the original published transcript until 2000. They have been unsealed and published separately, available on request from MLA Headquarters. They should be consulted along with the 1985 publication; notes indicate where the unsealed sections would be located in the original transcript. They expand on interview topics of the closing of Case Western Reserve University library school, the election for 1980/81 MLA president, and MLA Executive Director Shirley Echelman.