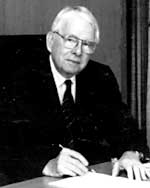 In a candid interview, Frederick Kilgour recounts his lifelong involvement with information retrieval and technology, most notably as President and Executive Director of OCLC from 1967-80. His achievements were recognized with honorary awards from the American Library Association, the Association of College and Research Libraries, the American Society for Information Science, and the Medical Library Association as well as with honorary degrees from at least four universities. Fred's numerous writings on a variety of topics were published in a two-volume compilation.

Fred aspired to a career in medicine but abandoned this plan as unrealistic during his senior year in college because of his obligation to support his mother and grandparents. His employment at the Harvard College Library, some of which involved microfilming foreign newspapers, suggested an alternative career. "The reason was that I had been in chemistry at Harvard and I was so impressed with the decisions that were made in the Harvard College Library having nothing to do with data or anything else, that I had a feeling that maybe with the scientific attitude of mine that I thought I had, that I might make a contribution to librarianship..." Fred did not have a high opinion of library schools based on what he called a dull experience at Columbia University School of Library Sciences. "I didn't enjoy it and the real low moment came when I got assigned to read a paper that I had published."

The war interrupted Fred's education. He earned the Legion of Merit award for his non-combat service in the Office of Strategic Services, which gathered information from newspapers in enemy territory for intelligence purposes. He called this experience his first cooperative venture. In 1949, he became the first librarian for the Yale Medical Library which had been established earlier that decade in two components, general medicine and history. Intrigued by cooperation and technology, Fred worked long and hard on a computerization partnership with Harvard and Columbia that collapsed just as funding from the National Library of Medicine was made available.

In the 60s, Fred was called in as a consultant to early discussions of the Ohio College Association which was examining ways to coordinate its libraries to support independent study initiatives. He and Ralph Parker prepared a report recommending "a centralized computerized catalog that would cut down on the duplication...and would automatically build a union catalog." Fred found himself recruited for the Executive Director position in 1967 and began work on what was to become a nationwide computerized library network. To achieve this goal, he spoke of difficulties, first in overcoming regionalism and then coping with the financial and technical strains associated with growth, sometimes at the rate of 200%.

Ever the visionary, Fred closed the interview with a description of the Electronic Information Delivery On-Line System, his step beyond the bibliographic catalog. "What it does is that is uses books in machine readable form...Here at OCLC we will get text in machine readable form, from those texts we'll extract the title, the table of contents and the index and construct accesses using drive truncated search keys. But they will be author, author title, title and subject accesses to those three item. We will sell you those three items possibly for the same cost as the paper book. We will get a discount from McGraw-Hill or whoever published the thing and will reimburse them the same way a jobber does...People in your community, which may exceed the medical school, with personal computers that have telecommunication capabilities can then go directly into your local on-line catalog, or database, really, and pull up the index. Say on a rainy Sunday afternoon and go through it and get the subject they want, and request that page number from the text and then the text will be displayed...There is no reason why this system shouldn't have as a goal...to make the information available to the user when and where he needs it 100% of the time."