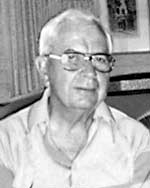 Thomas Keys was the librarian at the Mayo Clinic Medical Library from 1946 until 1972 and is known for his many publications and lectures in the history of medicine. He is the author of Applied Medical Library Practice, served as president of the Medical Library Association in 1957-58, and received the Marcia C. Noyes award in 1966. He says a great librarian needs “to love books and love people, too...you have to combine those two ingredients.”

Tom graduated from the University of Chicago Graduate School of Library Science in 1934 and went to work at the Mayo Clinic. During World War II he was drafted into the Army as the Assistant Librarian at the Army Medical Library in charge of the History of Medicine Division at the Allen Memorial Library in Cleveland, where the incunabula and early rare books had been sent for protection. After the war he returned to the Mayo Clinic where he “organized the library [and] planned the classification scheme, which of course was not in accordance with what I'd learned in library school.” During his tenure the library was remodeled and grew from 30,000 volumes to 120,000 volumes. Tom considers his greatest successes as the “building up of the journal collection ...building the rare book library, getting doctors interested in medical history, and starting the Mayo Foundation Society for the History of Medicine.”

Of his career, Tom says, “I would like to think...I grew up in the golden age of librarianship where we took great delight in personally helping our physicians.”