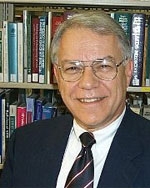 Nelson J. Gilman received Bachelors and Masters degrees in education from the University of Southern California in 1959 and 1960. He taught mathematics before returning to the University California at Berkeley to earn a Masters in Library Science in 1964. From 1964-1965, he was a Library Administrative Intern at the UCLA University Research Library under Associate University Librarian Paul Miles.

In addition to his position as Library Director, Nelson held appointments as Assistant Professor in the USC School of Medicine from 1971-2000, and was the Associate Dean for Libraries & Director of Planning for the Teaching Library of the USC Central Library System from 1989-90. He also served on and chaired many USC Committees, most notable the Health Sciences Campus Computing Advisory Group, the Faculty Handbook Committee, the University Instructional Computing Committee, the University Software Committee and the Advanced Biotechnical Consortium Business Advisory Council. He was a consultant for many projects, especially those involving planning library buildings and library organization.